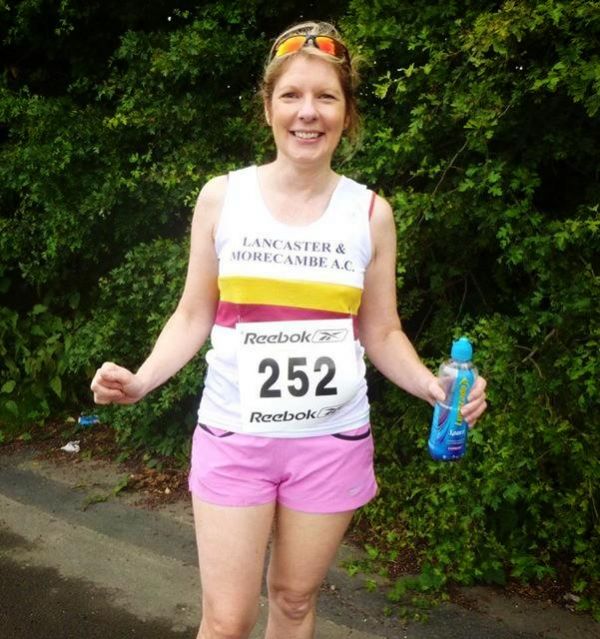 August had loomed up pretty quickly on my race calendar, and it's fair to say the Prudent Riverside 10 had crept up on me.

As ever, at this time of year, I'm training for the Great Cumbrian Run in October. I always run Cumbria or the Great North for the Jigsaw and Eden Valley Hospices in Carlisle in memory of my mum who, by all accounts was an amazing runner in her time. The deal about running for a cause is that it means maximum effort in return for hard earned donations.

On the contrary, to say I was unprepared for this race was an understatement, and quite a big one at that. The multitasking of modern motherhood (which like running, I discovered later than most), a busy work schedule (I'm speech and language therapist locally but am often called into Court to advise on cases involving brain injured people and children), two weeks in Eurocamp, and to be honest, the previous club schedule hadn't lit my fire, so it was easy to skip training. At this point I will also shout out in respect for all F50V plus runners. Hitting the hormonal wall of hot flushes, mental and physical change is another unmentionable barrier, so I can see why women's running groups are growing in number and popularity.

So, quite a tale to bring me to the start line! A new race HQ, the George and Dragon pub on the Quay was very welcoming. The early August morning had a buzz in the air and a multicoloured flash of assembling club runners and seemingly very fit folk along the riverbank. We were welcomed with complimentary drinks and squash, plus the usual slick registration from the Lancaster Race Series team with race numbers at the ready and lots of pins. There was a tempting array of flyers for forthcoming races, which might find their way into my weekends.

I love the Riverside course. Being local, it is a familiar one, involving a run out to Glasson along the path, then a short stretch along the road to Ashton Hall, downhill back into Aldcliffe and home. Easypeasy! Maybe, if I had done my leg work! I was pleased to see several LMAC members including Kev Wilson, Phil Lowery, Dave & Carole Wilkinson, Mike Roy, Susan & John McCann, with support from the Perry family to cheer us off. By this time I felt quite relaxed about it all, I knew where I was going, there was no pressure, but although there were a lot of very fit looking athletes among us, it was very much a race for everyone. Ten miles is a pretty respectable distance too, so lots of encouragement from well wishers.

Billy arrived to set us off from the start line, which was about 0.25 miles along the quay. At a relaxed pace the race began along the riverside as promised, taking us through the leafy glades out to Glasson on a slightly misty morning. We were well supported by two water stops along the way and one on the return. As I ran I could see Glasson and its boat bobbing harbour getting nearer, and soon we had completed the half way mark past the cafes, the Stork at Conder Green, and on to the toughest part, running along the road and a few hilly bits. A cyclist overtook me by surprise, shouting " Well done Michelle!" I realised I was smiling!

Our race marshals are largely volunteers who come out to support us and raise money for local charities. They are always welcoming and encouraging in whatever conditions they greet us, hail rain or snow. Sadly, when I am running, I never have enough time or breath to tell them what a great job they do and how much they
contribute to our races. I can now openly applaud Debbie & Chris Baxter, Helen McGregor and Alex Rizenko and all others, for their commitment to our Club and
our local races. On seeing Debbie I had turned a corner -literally- and found myself on the home strait back to Lancaster. At this point another lady runner caught up with me. Her name is Lesley and she kept me going to mile 9 with lots of chat and fun. That's the amazing thing about running, runners are like family. We talk the same language, have a common history and a goal or two, so it's easy to share stories and make friends.

At mile 8 we were welcomed with water and jelly beans, much needed as the sun was breaking through and the temperature was rising. One more mile to go until the glory mile. Topped up with a sports gel I knew the end was in sight, but my feet were unaccustomed to extensive pounding, so "burning balls" and small cramps were setting in. Carlisle Bridge was ahead and somewhere along the quay, the finish line was hiding. A real test of faith, I couldn't see it, but I had to believe it was there!

Sometimes, small miracles happen, and mine came in the form of the last marshal, Alex, shouting " Michelle, it's 50 seconds to the finish line!" I was snapped by Mark Lysycia, the race photographer. It wasn't a mirage - the medals were waiting, and so were my car keys which had been minded by Mark from Lancaster Race Series- thank you Mark! I was thrilled to celebrate with Lesley and Angela who I had run with along the way. My feet had stopped hurting, the sun was shining, and there were lots of prizes, including a bottle of wine for every tenth runner, courtesy of the race sponsors, Prudent. The ghosts that had been haunting me before the race had been laid to rest. I remembered I am a runner, I'm on track and literally back in the race. Half marathon, bring it on!

Many congratulations to the race winner, Grant Johnson, Salford Harriers, who completed the course an amazing 53:44, and to vet champions and fellow LMAC runners, Phil Lowery MV50 (1:01), and Carole Wilkinson FV55 (1:27).

A massive thank you to our marshals and support team, to Lancaster Race Series, and to LMAC, who somehow make it possible for ordinary people like me to do great things and make a difference to so many.See you for the next race!