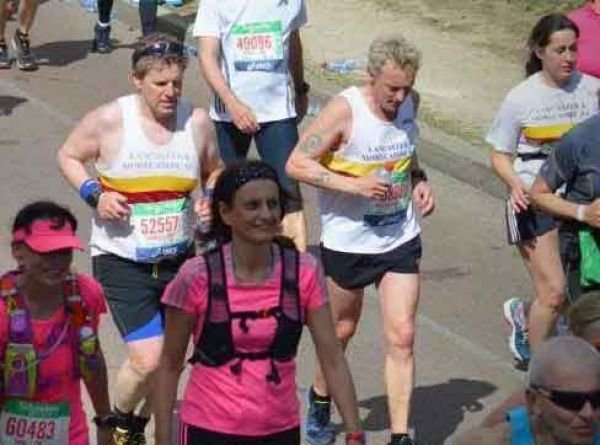 So the big day Sunday April 12th the 39th Paris Marathon and what a day it was to be.

After a cool Saturday which would have been perfect for marathon running Sunday turned out to be just the opposite – so after early breakfast of usual porridge, banana and energy bar I made my way to the start while drinking my usual Lucazade sports drink.

I picked up my number at expo or Salon Du Running as they refer to it on the Saturday which in itself was an experience a mass of
runners, stalls and the atmosphere of anticipation – but was not quite prepared for the throngs of people on Champs Elysee on race day , most of which heading in opposite direction to their starting pen as I headed to the baggage drop – which itself was quite a walk. However once there it was very swift so off I headed to my starting pen. The start itself – was not a mass start but staggered according to your estimated finish time with the elite at 8.45 and last wave at 10.05 – mine was 9.40.

So I was ready and amazed by the number of counties represented from Mexico, Australia, Canada and the 4,580 from the UK

So 9.40 we were off and the sight as we headed down to Place De La Concorde was simply stunning. Along Rue De Rivoli we went – and 1st 10k was 56.20 and I was feeling good. 1st gel point then off to Chateau De Vincennes – (which I’d never seen so I was looking forward to that) and round Bois De Vincennes - 20K was 2 hr 00:04 and it was off to Bastille where I had some encouragement for my wife and down by the Seine – I was happy to see Eiffel Tour in the distance and we ran past Notre-Dame and I started to feel the effects of the heat, again 29K my wife welcomed me past Trocadero and 30k in 2hr and 57 but by now I was feeling the heat. I knew if I stopped it would be difficult to get going again, but by 33/34 K cramps in my calf meant I had to slow to a run /walk – as we headed round Bois De Boulogne. The crowds were still there but not as deep as river side – but still they shouted as clearly I was struggling “Run Charlie” – and off I would go passing two wine stops but I decided against this. Still I fought on determind to finish and then at around 40k two Lancaster and Morecambe vests
shot past me, Billy Gardner and Anne Darys. Inspired by the sight of my fellow club runners – I caught them up – thinking it would only be matter of minutes before I had to let them go – but no. We managed to stick together – and all crossed the line within 30 secs of each other. Anne ran a superb 4 hr 22 closely followed by Billy and my time was 4 hr 34. Not my best – but no my worst – but the heat and the cobbles of Paris had taken its toll. However my pre-race plan wasn’t to PB but to see the sights of Paris and prepare for the 26.2 mile round Windermere in 5 weeks’
time.

All in all the Paris Schneider Electric Marathon is a fantastic event which I would urge anyone given the chance to have a crack at it.

More in this category: « Liverpool - Road Relays - Saturday 28h March A fantastic week of results »
Login to post comments
back to top