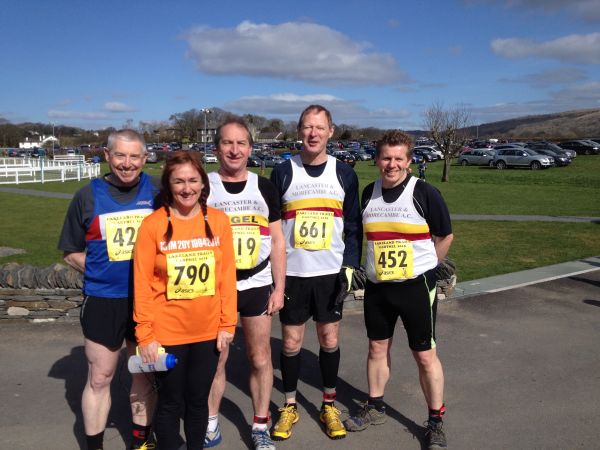 so this weekend was a busy weekend for the seniors ....

On the Saturday a number of runners ventured up to Cartmel - for the Lakeland Trails races over the 18K distance in both the race and the challenge.  The challenge has a longer cut off time of usually around 3 hrs 30 mins, 1st club runner home was Charlie Satterly 1 hr 58, followed by Tracey Bruce in  2hr 06, Ben Higginson (2nd claim member running for Preston Harriers) came home in 2 hr 10.  Then came Nigel Beeson in 2 hr 12 after a cunning but of overtaking of Jon Tibke by going through the ford while Jon went over the little wooden bridge.  Jon came home in 2 hr 13.  The run itself was challenging with 1300 ft of climbing, combined with stunning views over the South Lake District and a number of bogs however not as muddy as previous years due to the recent dry weather.  In the next race the 18K race Lancaster runner Nick Higham came home in 1 hr 34 follwed by Lindsey Higham in 2hr 36.

At the Garstang Gallop 7 mile race (on the Sunday) the club was well represented; first back was Jayne Perry who ran a super time of 48m.34 to take second prize and next was Louise Goddard running strongly to finish in 50m.39 in first veteran 45 place. Christina McGuire ran well in 53m.39 just pipping Steve Perry to the line and he finished in 53m.40. David Wilkinson ran a good time of 54m.59 and he was followed by his wife Carole in 58m.34. Other finishers: George Parrington 58m.46, Richard Holden 1h.01.28 and Emma Holden 1h.02.53.

The Trimpell 20 mile race organised by Lancaster Race Series has established itself as a popular warm up event for runners aiming for a spring marathon. The race is very flat as it uses the cycle track from Salt Ayre Leisure Centre down to Caton and the weather was fairly kind, if perhaps a little warm for
the runners. There were 530 finishers this year and winner of the race was Julian Hatcher from Border Harriers in 1h.53.49.

Apologies if anyone raced and wasn't mentioned - but please do email your reports so we include them.