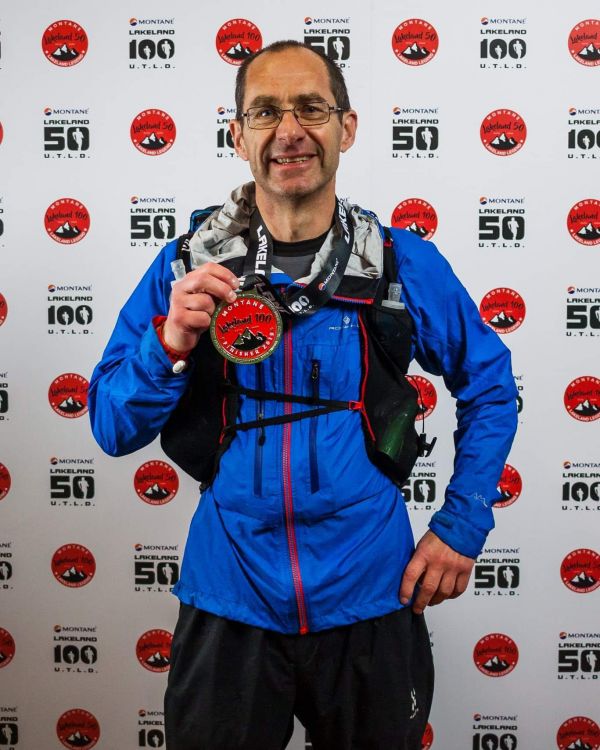 I wrote an article last year on my account of completing the Lakeland 50 and thought I ought to follow this up with a brief account of my successful completion of the Lakeland 100 this year.

So, how was it? In a word gruelling. We set off from Coniston at 1800 on Friday 26th July and returned at just after 0130 on Sunday morning.

The first part involves running through the first night towards Wasdale via Seathwaite and Boot and was relatively pleasant. The weather was still warm and spirits high. The views as dusk descended heading into Seathwaite were stunning. The grand sweep of the Lake District hills ahead and an epic adventure beginning.

I first needed to deploy my head torch as we reached Wasdale and the torch stayed on from here to Glendeterra.

The time passed easily enough as I initially ran alongside James who I had met at last year’s 50 , but he was suffering with the heat and dehydration and dropped out at the third checkpoint. The section over Black Sail pass is a particular brute in the pitch black (although looking back along the valley is quite a spectacle as you can see a trail of head torches).

In the early hours as the light grew, the rain started and in essence it never went away – with it being increasingly heavy.

By this stage I had teamed up with Ian who I had met albeit briefly the year before and we ended up forming a really good partnership – looking out for each other. The heat had subsided, it was daylight and we were doing ok. The checkpoint at Blencathra was quite something. Each checkpoint tends to be themed and this one was rock n roll, with all the volunteers dressed up accordingly. So it was that at 5am Freddie Mercury made me marmite on toast. Ian even had a shot of whisky before we set off again.

The next section is a bit of a trudge through Dockray to Dalemain which is the half-way point where the Lakeland 50 starts (and is the 60 mile point for us). We had drop bags there so I changed my t-shirt socks and shoes, after attempting to apply some compeeds to my badly blistered and bleeding feet. In the bogs and rain my soles had started to split – nasty! My mate David was there to lend me some more socks and give moral support. A quick bite of some hot food and then we were off again. We were two hours ahead of the Lakeland 50 starting.

The next section included the stretch from Howtown over Fuesdale, along Haweswater to Mardale Head and this was horrific. It was windy as well as lashing it down, with an awful climb followed by an even worse section along technical terrain (which was now soaked) along Haweswater. This was a real low point. We were cold, my feet were hurting and frankly I was a bit fed up.

Eventually we got to Mardale and had a hot drink , more food and things picked up as a few 50 runners went past, some of them I knew and others not but all cheering us on. Ian and I kept on moving, trying to run the runnable bits and walking the uphill parts.

We were through Kentmere and into Ambleside by tea time, with the streets of Ambleside thronged with people cheering us on. Climbs by this stage were becoming really challenging and I had developed a pain my right shin to take my mind off my battered toes and feet.

An unexpected boost came at Skelwith where I was met by Sam Kellett, with my wife and kids. What a boost after 90 miles.

The last 15 miles seemed to last a lifetime. Our pace had hit full shuffle mode and every incline was agonisingly slow. Back in the dark with the head torch on and the rain lashing it down again. By this time I had started hallucinating – rocks turning to animals, I looked down and saw a mouse looking up at me, a wall turned into a double decker bus. Ian was convinced someone else was with us and was hearing voices too.

We eventually hit Tilberthwaite and the infamous “Stairway to Heaven” for yet more climbing. A run along the top in torrential rain with mud and rock, followed by an eternal slippy descent, then along the track back into the finish at the John Ruskin School some 31 hours and 22 minutes after originally leaving there – to be led into the marquee and inducted into the hall of “Lakeland Legends”.

Without doubt this is the hardest run I have done by a long way. Nothing comes remotely close. The key attributes to finishing it being mental resilience and an ability to ignore pain. As Ian and I frequently said to each other – deal with it.