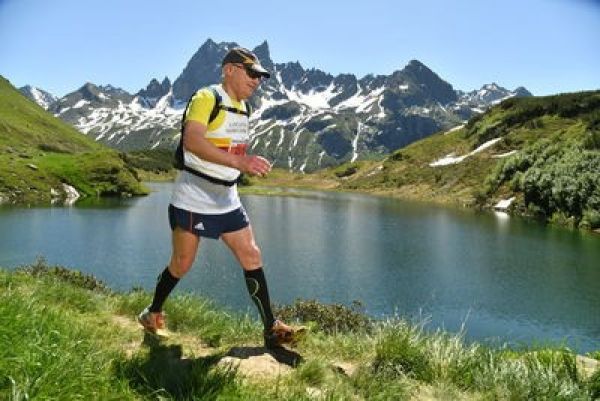 Several months ago Lancaster and Morecambe AC member David Wilkinson decided to take up a 60th birthday challenge by entering the St Anton Arlberg marathon in the Austrian Alps.

For the whole of 2019 David has been meeting up with his daughter Nadine Parsons (Garstang Running Club) and running the hills around Caldervale and Oakenclough in an attempt to become fit enough to complete the tough mountain marathon in June.

David travelled to Austria with his wife Carole to compete in the event on Saturday 29th June to be met by an unprecedented European heatwave of between 30 and 40 degrees centigrade.

David joined over 200 marathon runners in St Anton village centre and the starter’s gun went at 08.30 am to commence the race.  The first 10 miles were challenging as they went straight up a mountain.  This leg ended at the snow line where David had to run over snow, through bogs and fast flowing streams.  Several sections over the next 2 miles consisted of technical fell running jumping from rock to rock.  The route eventually settled down onto reasonable tracks, however the steep descent of over 8 miles took its toll on David’s legs.

Having successfully got through a time gate at 18 miles the route took a further twist with another 3 miles of steep uphill tracks through pine forest.

The last 5 miles downhill was a mixture of mountain roads and steep descents through woodland ending in the village of Silbertal.

The whole marathon consisted of nearly 4000 feet of ascent and 5000 of descent.  It took David 7 hours and 9 minutes to complete the course in temperatures of 32 degrees centigrade.

Whilst being a novice at mountain and fell running events David concluded that the event was definitely worthwhile as a fitness test and to experience the unbelievable alpine scenery.