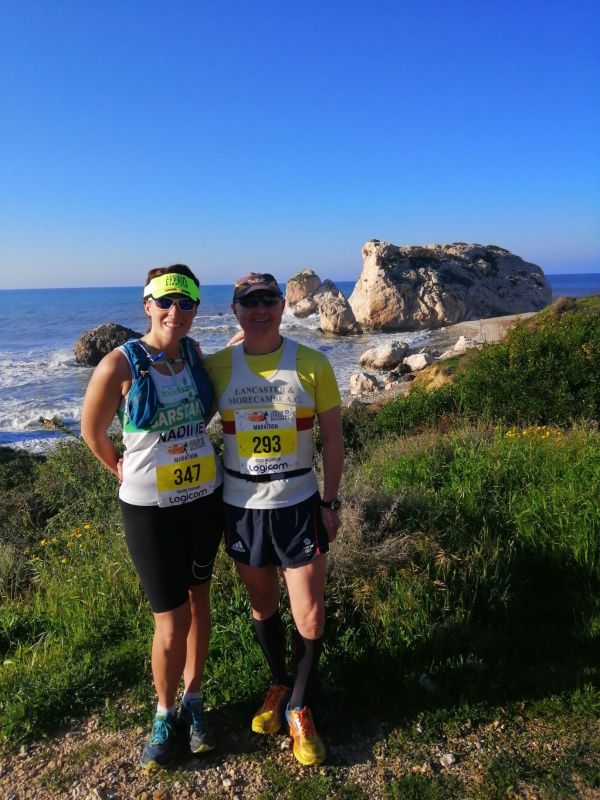 After training together on many long runs over the winter period both were confident that they could cover the 26.2 mile distance.
On race day there was great excitement at Paphos bus station as the 425 marathon runners gathered at 6.00 am to be transported to the start at the local attraction Aphrodite’s Rock. There was not a cloud in the sky and full sunshine as the race started on time at 7.30 am. The course proved to be undulating but with no serious hills, a steady pace could be kept and at half way David and Nadine met up at a loop in the course and there was only 6 minutes between them (David 2 hours 5 minutes and Nadine 2 hours 11 minutes).
After half way the heat of the day and a very strong headwind slowed both runners down and both found the going difficult. David eventually finishing in 4 hours 39 minutes 10 seconds. Nadine had an uncomfortable time with some sickness and cramp at 15 miles, she kept going and was satisfied with her time of 5 hours 23 minutes and 30 seconds.
Paphos Harbour and Castle made a great backdrop for the finish and with friends around from local running clubs also taking part in the day’s events the atmosphere was fantastic. Thanks also goes to David’s wife Carole also Lancaster and Morecambe AC for her great support throughout the event.