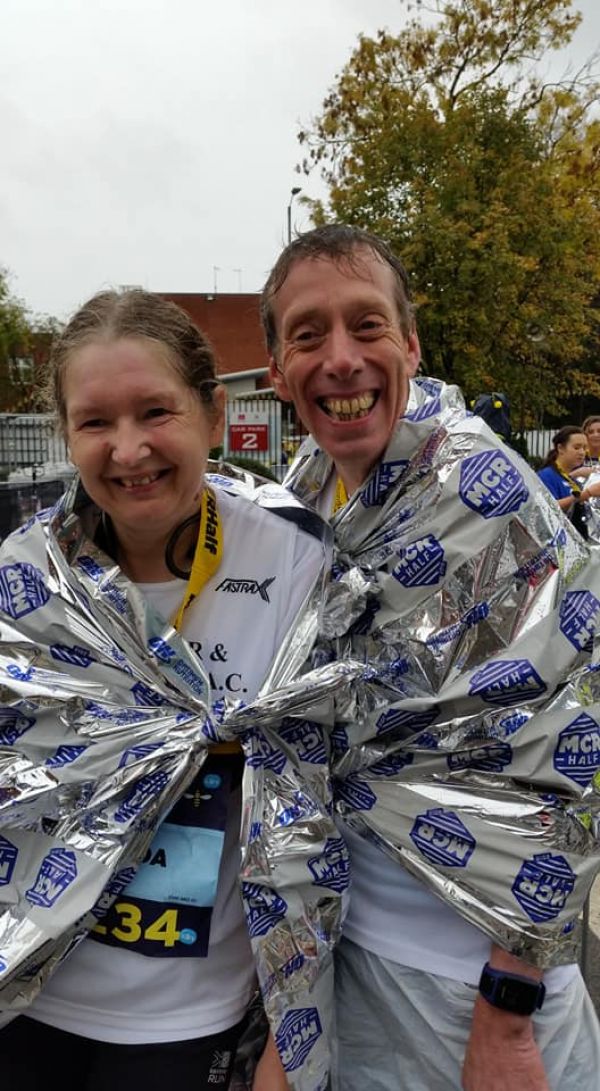 Well, here we are, another year down the line.

Just over a year ago two Walkers (Linda and David) joined LMAC. We had a FREE one-month trial and signed up straight after. We like FREE cos we are Yorkshire. We both never thought we were “good enough” for club running, but this not the case. At LMAC there are different groups which range from super-fast to super slow. David is in the super-fast group and Linda is in the super slow group – but getting faster and stronger.
Looking around us, we don’t actually see many husband and wife teams. When we go out for our training runs, we never run together, but its comforting to know that the other arf is out there if needed.
The weekend of the 13th October was an exciting running weekend. I never thought I’d use the words exciting and running in the same sentence. On Saturday we travelled to Manchester to run the Half Marathon on Sunday. We made a weekend of it with a 2-night stay. So, a nice pre-race pasta meal on Saturday lunchtime followed by a chilled afternoon and evening. Sussed out the start line and bag drop. Amazingly my nerves had not kicked in – maybe they’d kick in on Sunday.
We had been watching storm Callum approaching all week and the weather forecast for our run had been looking good – very light rain with only a small chance of a shower as storm Callum was running away fast. However, typical Manchester style that all changed on the Saturday evening, when they announced VERY heavy rain. We got up at 7.00am on the Sunday (race day), with tons of time to spare before race start time. We left our hotel at 8.15 after I’d been to the loo at least 25 times – yeah them blooming pre-race nerves! Ah well, at least I won’t need the portaloos. As we reached the start line it began to rain and it got heavier and heavier as the morning went on.
Wearing our LMAC club vests we were proud to run through the streets of Manchester with supporters shouting “go on Lancaster and Morecambe”.
It was hard running in the rain – but at least it wasn’t windy. David finished in 98.24 and his target was 100 minutes. One happy chappie. I finished in 2.40.43 and I had been hoping for a very ambitious 2.30, however I knocked 10 minutes off my previous half marathon in London, so I was also very happy. At the end of the race we were both really surprised at how quickly we felt cold – but we were both drenched, and David did have to wait over an hour for me to finish – that’ll teach him to go so fast! He was pleased that several other LMAC runners came to wait with him in the finish area. Thank goodness for the foil blankets in the goody bag. They were a bonus. In true Yorkshire style, we have neatly ironed and folded them to use again in another race……..!!
Lots of support from LMAC in the run up to Manchester. Even though I am probably one of the slowest runners in the Seniors group, I am never made to feel slow. All I get is encouragement every time I run. I’m never going to be Mo Farah but I have come a very long way in the 3 years I’ve been running. David hits more targets than me but that down to him keeping track on his splits via his spreadsheets. I’m not too fussed – also I do try very hard.
Thank you LMAC. I never thought that we’d be having conversations over our meals that involve split times. Ah well.