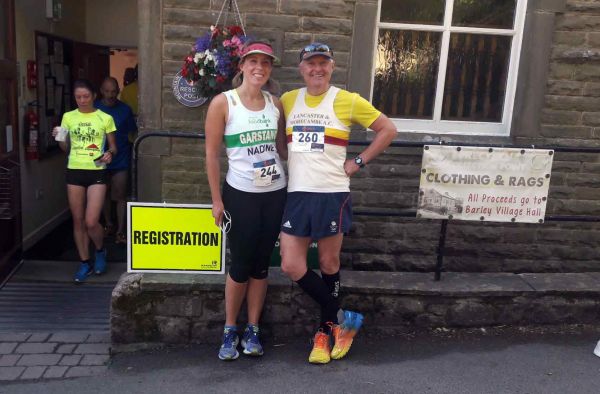 decided to challenge themselves by entering the Pendle Running Festival, Half Marathon on Saturday 14th July.
Once they had read that his event was one of the most challenging in the country, with over 2000 feet of ascent, they decided it must be attempted.
On the day they arrived to a small well organised event with easy parking, home cooked food, toilets and bag storage. So far so good.
The sun was up and blazing well before the 10.30 start, and with a small field of under 60 runners they knew they were in for a challenge. As the race got underway they were blown away by the country views through the villages of Barley, Roughlee and Newchurch. Pendle hill came into view after a two mile climb and made a stunning backdrop.
As the temperature rose to 24 degrees with little shade, both runners slowed down to walking pace on the second lap, but eventually finished totally exhausted. The extreme nature of the course was reflected in the finishing times of David 2 hours 33 minutes and Nadine 2 hours 50 minutes.
As they sat on the grass at the finish line they commented that maybe they should have entered the 10K event instead!!!