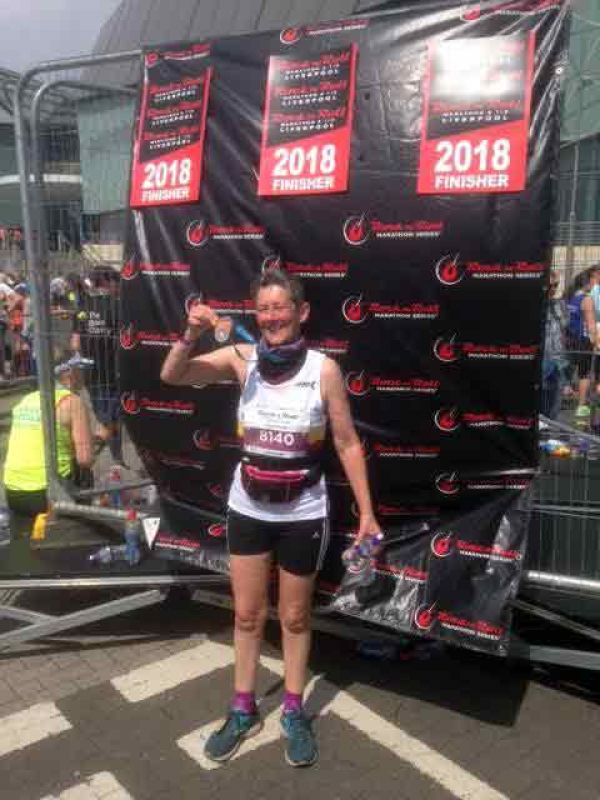 On Sunday, 20th May, 2018, I completed the Liverpool Rock and Roll Marathon. Annes Story

It was brilliant to be running in my home town and running past many childhood landmarks. The last 6 miles were particularly gruelling due to the very hot weather and literally no breeze coming off the River Mersey!
I felt really chuffed with my time and I got a PB! My time was 4:23:33. I want to say a very big thank you to LMAC, since joining the club last year my fitness has certainly improved. I would particularly like to thank Lisa, for encouraging me to step up to a group that certainly took me out of my comfort zone. She always spots me even though I try to hide behind tall people and ensures I'm pushing myself. I would also like to thank Angus, for keeping me going at tough points during the 800 and 1200m runs around Ryelands Park. That all helped me to push through to the end!
This PB is all down to the support and encouragement I have received from the group leaders and individual members of LMAC.
Finally, a big thank you to Billy, who does so much for our city's running community.

And now from Charlie

So Saturday 19th May 1st of the weekends races – Liverpool 5k. I was meant to be running this with my daughter so instead my Son harry (who isn’t really a runner) – stepped in a completed the 5k in 31 mins – a nice run round pier head and the docklands of Liverpool ending in the arena with a gantry of lights smoke and commentary. Sunday the ½ marathon. This was my second time at the rock n roll ½ and second ½ marathon in 4 weeks. Blackpool on same day as London took me 1hr 49.58 in complete opposite conditions to the one in the capital. We had wind, rain and muggy heat at end. It’s all part of the build up to the Lakesman ½ Triathlon in June.
Race day – we knew it was going to be a warm one so no PB but still aiming for a good run out as I’ve shifted a bit of weight this year and my times have steadily improved over all distances. In the coral at start I met Keith (Anne's better half) out of all the runners what’s the chance of meeting another LMAC runner in same pen!! So at around 9.15 we were off – good start round pier head and the 1st band and we started looping round City. Slightly different route than last year but soon passed the Cavern and John Lennon statue and other runners could been snaking round in the distance. Back onto the strand and then the climb up to Sefton Park. Every water station I made the point of taking on board liquid (lesson learn from a hot marathon in Paris….) still running 8.15/8.20 I was feeling good as we climbed and then round the parks – more music and snaking round Penny Lane when you’d see all the runners return on the out and back spotting the different club vests.
Soon after looping round the park it was down to Otterspool – and I was starting to feel the heat – still running around 8.30 min mile though I knew a long 3 miles or so on the riverside was to come. Hoping for a river breeze I was greeted with nothing – just heat there was nothing to do – but grit my teeth and keep on running. Pace started to slow and soon I was counting off the miles  or minutes to when it would all be over. Crossed the line and ready for my free pint in 1hr 52.38 – 3 mins 20 up on last year so pleased with that. The day ended – (following my free pint) the fun run – thought it be a good idea – just over a mile round pier head in 9 min 18 seconds.

So what a great weekend – medal fest…….one for each race, one extra if you two over the weekend..and one for those who returned after last year. The marathon faced its critics – but as far I was concerned I witnessed a well organised a very enjoyable race/weekend. Would I return – to dam right.