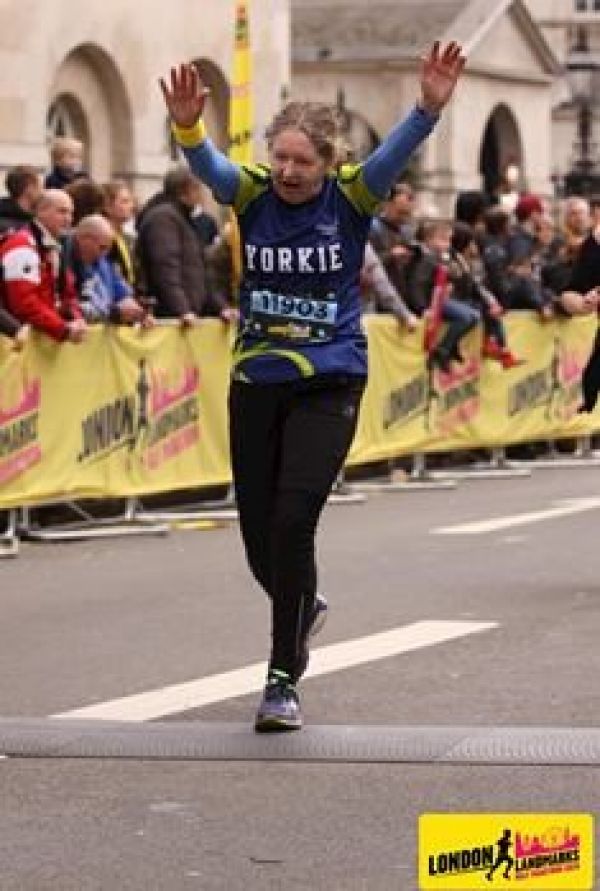 I can’t honestly believe the weekend I’ve just had.

My name is Linda Walker and I am 55 years old. I began running just over 2 years ago – January 2016 when parkrun was born in Lancaster. Planning on just being a regular volunteer (as a non-runner), I soon got the running bug.
When I began running I always said I didn’t want to run more than 5k. I was happy to do my weekly parkruns. Then I discovered 10k races. Soon I got the bug for the 10k runs. I have now got several 10k races under my hat.
In September 2017 both myself and my husband had a “taster month” at LMAC as somehow I’d managed to sign myself up to do a Half Marathon in London. This is the runner who said she didn’t ever want to run more than 5k!! So, I figured if I joined LMAC that I would get tips on pacing and also to gain stamina.
In November I joined several senior runners and we all trundled off to Lytham St.Annes to run the Windmill Remembrance race. The wind was biting, and it was really cold. Somehow I managed a PB.
In December I ran the Myerscough 10 mile. Absolutely gutted not to get a medal – however, all runners got a CHEESE. I certainly wasn’t smiling. It was probably one of my hardest runs as being a slower runner, I found myself running alone on those quiet country roads. If I’m honest, I really didn’t like it. Then I went and got a knee injury. So, no running in January to give it chance to heal…….lot of physio, and I was cleared to run in February, but ordered to take it easy.
With the half marathon looming, I was concerned I may struggle. However, at the back of my mind I was also thinking that I had 3 ten milers under my hat as I’d done a couple in training in November. I was so desperate to get back to LMAC to regain my stamina. In February and March I did a few races, and actually found I was running faster and amazingly wasn’t getting out of breathe either. Keen to stay injury free I avoided Lancaster parkrun as I didn’t want to risk falling or twisting.
The London Landmarks Half Marathon arrived on the 25th March 2018. For some bizarre reason I didn’t have any pre-race nerves. Normally I’m on and off the toilet 25 thousand times before the start of a race. Maybe it was because I knew there would always be runners/walkers behind me as I’d heard so many people would be walking or jeffing round. There was added pressure too as I was running for The Alzheimer’s Society and have raised over £1,000 in sponsorship. In my mind I had a time of between 2.45 and 3 hours. I would have taken anything under 3 hours. When I started the race, it was a fantastic feeling, and I ran to enjoy it – not for a time. Whatever I did would be a PB with it being my first. Oh incidentally I’d already signed up for the Manchester Half in October – before I’d even done the London one!! As I ran in London, I found it really emotional. Lots going on in my head as my brother sadly passed away aged 58 two weeks ago. He just went to bed and didn’t wake up and he’d not been ill. Still, I managed to get to the finish in 2 hours 50 minutes and 55 seconds. I was pleased with that, seeing as my GPS showed I’d run 23k.
It’s now making me think of a 5k as a “walk in the park”. I’m looking for a faster time on the next parkrun I do. Watch this space.
My thighs have ached like crazy since Sunday which is probably due to lack of long distance training. I am really looking forward to going back to LMAC again so I can gain stamina for the Morecambe Half Marathon in July.
Thank you LMAC.