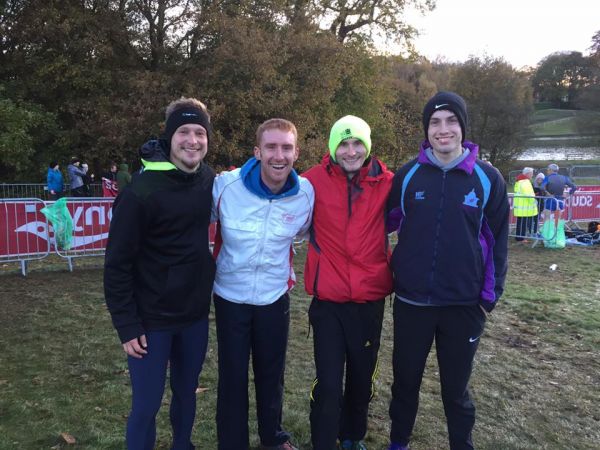 The Course at Berry Hill had been meticulously prepared and reports from the venue stated it was in good condition but a number of sections began to muddy up as the junior races took place. The mixture of good parkland, a wooded section with lots of undulations and a fast finishing section made it a good course for the event and some exciting competition.

With the event boasting record fields and gains in all age categories the standard of competition was excellent and the senior men had 220 teams declared and ready to take on the National event.

After watching the junior section taking part the seniors were then up. On the first leg was David Brown who recently had a fantastic run at the Cardiff Half Marathon and is beginning to build up his training again after a period of recovery and base training. The first leg with a large number of competitors makes it difficult to pace but David began to pick his way through the field on the second lap gaining a course personal best bringing the team in 85th position.

On second leg was Isaac Scott who having recovered from a serious knee injury is beginning to show his qualities as a strong LMAC performer. Isaac started to pick off clubs early on and continued to do so on the second lap. Isaac was able to take 10 places bringing the team in 74th position and again running a course PB.

Taking the third leg was Team Manager Mark Gardner who is currently concentrating on the indoor season but put in a strong performance managing to pick off another 3 teams bringing the team in 71st place and giving Mark Leadbeatter a great shot of getting the team in the top 70 teams.

Mark who is currently recovering from his heroics at the Chester Marathon only 3 weeks ago ran a really strong race and continuously picked off teams around him and managed to fight off eventual winners of the event Tonbridge ‘A’. Mark brought the team home in 65th place and in less than 10 minutes of the eventual winners which is fantastic given the 20km distance covered.

More in this category: « LINDA WALKER - MY STORY AND GREEN DRIVE DRIVE 5 Senior Road Running Championships »
Login to post comments
back to top