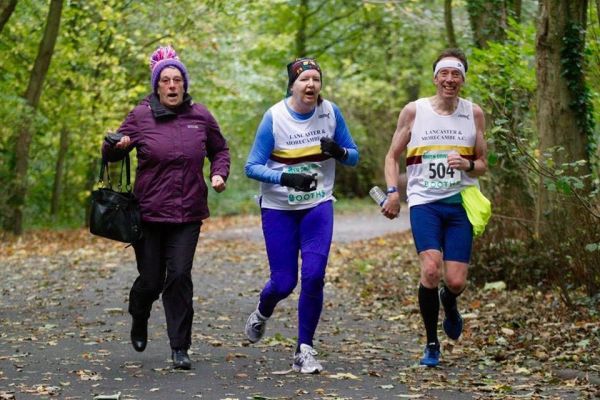 My name is Linda Walker and I am 54 years of age. I began running in January 2016 when Lancaster parkrun was born.

At that point I had never run before, and couldn’t even run for a bus. I joined a running group called Plodding Along which helped me to reach the 5k mark. I remember the very first 1k I ran – I was so chuffed with myself…yes I did say 1k !! Lancaster parkrun spurred me on and the addiction makes me get out of bed every Saturday morning. I am up to 80 parkruns now. My goal in to run Lancaster parkrun in under 35 minutes. I’ve managed 36.11 but can’t get it any less at the moment.
This is the main reason why I have joined LMAC. I want to improve my technique and get some good coaching, and basically learn from the other more experienced runners. I have two runners, who I am chasing, and they are both older than me – in fact one lady is over 80 years of age and she is amazing. Such an inspiration and so so encouraging. One day I WILL catch her up. My mother in law says we are too old to be running as it will do us more harm than good! If I am still running at 80 then I think I will have proved her wrong.
One regular volunteer at parkrun (a LMAC member) has encouraged me right from the start. She’s forever shouting at me to run faster up the hills. She suggested I join LMAC and has seen me improve over the last 18 months, and knows I have lots more to give.
My husband (David Walker) has also joined the club and we encourage one another to run. After every Tuesday evening, we come home and we talk to one another about our runs. He’s much faster than I am, but it doesn’t bother me. It doesn’t matter how fast you run – in fact, I’m nearly always last but I get the biggest cheers. David has only been running for 3 years, and like me, he’s heavily into parkrun and he’s one of the Run Directors.
Last week at LMAC we purchased our club shirts and we wore them for the first time on Sunday at the Green Drive Five in Lytham. What a fantastic day we had. Charlie drove the minibus and there were a dozen of us. The weather was atrocious (Storm Brian) with gale force winds and massive puddles. It really was great fun though. The picture shows me only a few metres from the finish line. The lady with the handbag on the left seems to follow me everywhere!! She ran the 400 metres in shoes and carrying her bag. That’s Christine Perry – the parkrun volunteer who’s encouraged me right from the start. A credit to the club. Christine was shouting at me to run faster – maybe I should have borrowed her bag and shoes – ah well – maybe next time. David is on the other side of me and he’s got a big smile on his face – that’s because he finished 20 minutes before me and is already carrying his finishing t-shirt!! At least I finished.

My next race is on Sunday which is the Lancaster Jailbreak 10k. A message for Billy my run leader……… I am going to give that final hill a go. No doubt Christine will be behind me ringing her cowbells.
On November 12th I get my next ride on the minibus back to Lytham, but this time it’s for the Windmill 10k race. It is great to go with a group as everyone knows where they are going and there’s no hassle having to find a parking space, and another bonus – it’s cheap.!!
Absolutely loving the training nights. Thank you so much to all the leaders. Bring on my London Half Marathon, more than twice as far as I have ever run to date, in March – that’s another one of