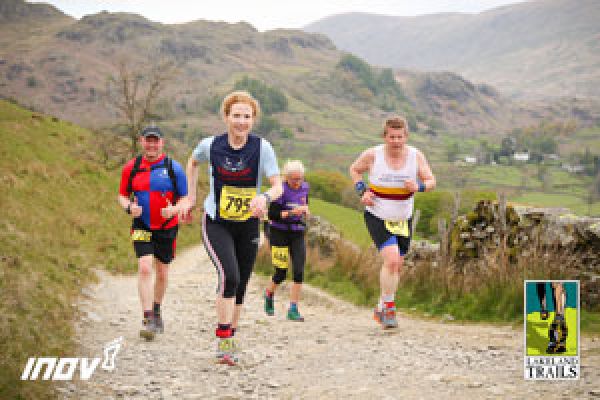 So this became a double header by accident – not planned. I decided to enter Staveley as I always enjoy the Lakeland Trails – it would give me good long run on my build to Rock N roll 1/2 at end of May and also my daughter Holly had recently got a taste for the trials so we could both race same day – 5K for Holly 17k for me. Wigan I chose as it was decided by senior road runners to be a club targeted race – sadly it didn’t catch on. Paul James had entered being old Wigan Runner (sorry about old Paul) so I thought why not keep him company.

So to Staveley – 17K the LMAC hills session week before was well timed however the brutal morning circuits legs session day before not ideal on memorial steps. So to race day – I’d been suffering with my asthma last few races but luckily today all was well and breathing well from the start. A little jog through the village – over the bridge and as with all Lakeland trails the climbing soon started on farm like lane – then across the hills on the grass. The weather wasn’t as hot or sunny as forecast but still ideal to run in a vest. A drop down to a road for few hundred metres then back on smaller lanes - past factory with water station and after another climb the race dropped down to give us nice view of River Kent – but then we climbed through woods and a sharp left – I knew what was coming. A tough climb of 100m or so. I always struggled here. A few words with fellow runner in Manchester City shirt confirmed my team were 1- 0 up after 2 mins – happy days and up I went. I took it slower conserving some energy for Sting in the Tail and also tomorrows run – today wasn’t going to be PB day – but managed to run most of the climb with odd breather. Photographer as usual was on the climb – couldn’t have my photo taken walking and it seemed easier than last year – I was at top.
So now 3 flattish or so miles on tops – the sight of runners snaking in front of made me realise how far it actually was – a long way to go but I kept on – a bit of mud. It was a hot day – and not expected this – but straight through puddles I went while trying avoid the bogs on the side. Didn’t want to lose a shoe. Another water point then right turn towards “The Sting in the Tail” While my GPS shows it only a 50 m climb or so after 10.5 miles its steep climb to the top and not welcomed by my legs. But first I had to negotiate 3 styles before the ascent. Again people were walking this bit – I joined them for some of it while signs counted down “1000m to the sting”, “500m to summit” and “will you survive the sting in tail” – I struggled up last few metres – briefly admired the view and passed someone taking photo with camera on his phone. Why not!! So to the descent – I’m never good at this – far too nervous as people flew past me on Stoney trail that zig-zagged back down towards Staveley and the wind tried to push me back up the hill. Another small style and a small path took me back onto the roads – probably 1000m to go and suddenly my calves felt like lead and I came to halt... Exactly same place last year this happened – why – no idea. Someone shouted to try rub it out – so I thought why not – while thinking that Sunday’s race was over before it started. So I felt a bit better and I was off again and soon greeted by my daughter (who was 2nd lady in 5K earlier) as I entered the finish area. A lap of field another runner past and coming to finish with sprint – but just didn’t have enough to take runner on finish straight. 2 hr 01 min (207th from 494) – few minutes slower than last year – legs like lead. Chip was removed for me as I struggled to bend over and I was wondering how I was going to manage 10k next day. Meanwhile of to the brewery for a recovery drink as we had to wait for presentation for Holly to get her well-earned prize earlier.

So next day to Wigan 10K – trail. A new one for me – Wigan can’t be that hilly and I was glad to be correct with this it was mix of woodland trials and bridle paths. A 2 lap course with big field of 2/300 hundred runners. The sun was stronger than yesterday and we walked to start on narrow trial – couldn’t run more than 3 abreast and 10.30 we were off. A slow start as I managed to pass few on side of path not sure how far Paul was behind me (we started together – and he was never far from me). My legs felt fine for 1st 2 miles or so then I as counting down the kilometres to half way stage I was feeling heavy legged and hot but still running steady pace after 8 min 30 for 1st mile it was more like 9 min mile plus for last 3. The second lap recognising bits of course and I can’t praises the support of marshals enough – they were brilliant as was the spectator in Staveley shirt from yesterday who though I was mad after I shouted over to him (think I was agreeing with him by this point). 2 miles to go 20 minutes of running as the runners came towards me on way back home after last loop by the lake which we were running round. Got to leave the lake head back through woods and some welcome shade to harsh sunlight though open meadow- passed the tail runners as they headed out and left turn and I could see the finish. Last kilometre through shade and I could see finish – (and people running round the field – my heart sank – did I really want a lap of the field to go – my legs where shattered. Happily as I turned into field I was pointed straight to finish as they were on cool down. Finish chute – this time I passed the runner in front of me to finish in 54.50 (155/251) and 8 seconds after me Paul finished. Apparently never more than 3 runners behind me – which explained my concern at 8K when martial shouted – to Paul – was that Paul James I was wondering expecting him to fly past at any moment. So Wigan Trail – lovely race I hope to return to a double header weekend was survived. A welcome pie and a pint to finish with.

More in this category: « Road runners round up - Easter 2017 Senior - round up. April - to May »
Login to post comments
back to top