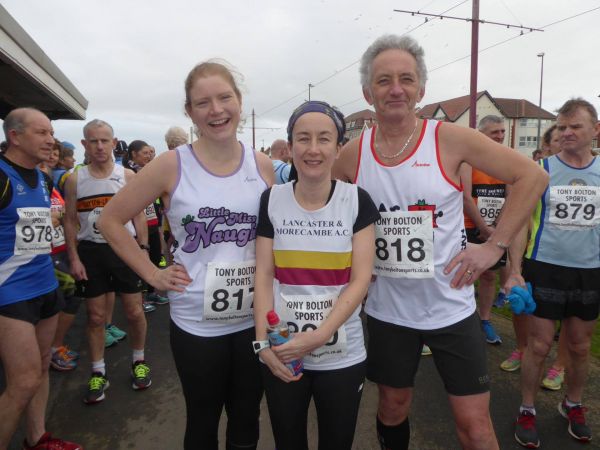 In February I did 2 races back to back Stanley Park 10k on the Saturday along with Charlie and Katherine who won the ladies race .
On what is a flat but twisting course race went pretty well to plan.
This was followed by Lostock 6 on the Sunday morning, which despite being quite undulating went very well.
So I thought lets try another double, this time a bit further having already entered Dentdale 14 I thought why not back it up with Sweatshop 10 .
For those who have never done Dent it is a tough and undulating course on a very picturesque course, this year the organiser added a shorter race too over 7.9 miles in which my Daughter Jayne finished second Karen Davis also took part .
So Saturday morning dawned I thought why not do Parkrun first, so I ran round with Roxy our Labrador dog did the warm up then brought the course in after the run was over so that was 5.5 miles in the bank.
On to Dent joining Emily Stapleton and Zoe Hooton who were going to do the double also there was Billy Gardner doing the 14 .
So after the warm up off we went in cool and dry conditions on reflection Zoe and I did run the first half a little too fast but got round intact meet Emily at the end and went to enjoy the homemade refreshments in the school .
Another 14.5 miles in the bank!
Sunday morning off we went to Blackpool to run the Sweatshop 10 miler on a nice flat course with no Hills !.
Met Emily where we gauged how we had recovered from the previous day
Better than expected ! so off we went again on the first of 2 laps nice and steady ,picked up the pace in the last few miles and on to the finish.
30 miles in the bank, in theory sounds ok .
As the title reads Older and Wiser ? as they say the Jury is out ....
Ps Had Monday as rest day
PPs If anyone wants to try a double come and have chat .
PPPs Wore long compression socks for the first time on Sunday they Work !!!!