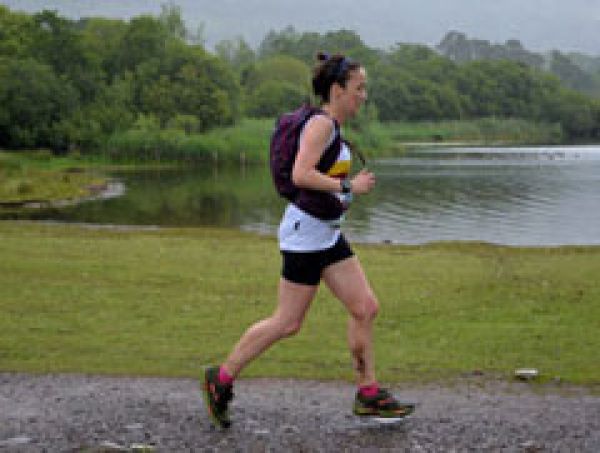 On Saturday July the 9th I went up to Keswick to take part in the Borrowdale 21k Trail Run, part of a series of trail races that weekend, including a 5k along the shores of Derwentwater, and a marathon taking in Scafell Pike.

I’d entered on a whim, having decided I wanted to do more trail races this year, and I was hoping it wasn’t going to be too difficult as I’m not particularly confident off-road. I’d checked the times from the year before, and the last person had done 2 hours 30, so I figured it couldn’t be too tough. Mostly, I was just hoping there wouldn’t be any paths with sheer drops to negotiate.

We started out in Portinscale, at the top end of Derwentwater. I got to the start pretty early so there was plenty of time to weigh up the other runners to see if anyone else looked as new to all this as me, and what kind of gear they were carrying. The instructions had said to carry a waterproof, a thermal top and some food and water, so I had a little rucksack with them in. A lot of the runners were carrying something similar, while others didn’t seem to be carrying anything with them at all, and a few had huge rucksacks that I can only guess what they might have contained. There were some really scrawny, hardy-looking runners standing up at the front, but at the back there were all sorts, including some people running with dogs, and a couple who were obviously planning to walk.

After the usual shenanigans where it turned out we were all standing in the wrong place (rather hopefully, we’d gone to the top of a steep hill, hoping to avoid having to run up it at the start of the race) and had to be moved back down to the proper start line, we were finally off.

The first four miles were fairly easy, although quite a lot more undulating than I’d expected given we were going down the side of the lake. The trail was mostly fairly smooth underfoot, with just a few sharp downhills to be negotiated and a few tree roots and rocks in the way waiting to trip you up. We got to the end of the lake and the sign that told the 21k runners to go right, and the 13k-ers left. A few people asked the marshall whether they could go left instead of right, but I was excited to start the climb over into Borrowdale. The weather had cooled down and we were out in beautiful countryside. Why would anyone want to cut the run short?

May be someone who knew what was coming next. We started to climb. It was quite fun at first with a nice rocky path to negotiate - a bit more interesting than just jogging along the side of the lake. We met a group of mountain bikers coming very cautiously down hill. It felt like we were on a fun day out. The path got a bit steeper. A few people started to do that fast walking thing fellrunners do on tough climbs. I’m not very good at that. I end up just walking really slowly and it hurts my legs more than running. So I kept running as long as I could, even though I was only going about the same pace as the walkers. But eventually I had to admit defeat and walk too.

I was just starting to get really fed up of having to concentrate so hard on where I put my feet when we finally reached the top. A cheery marshall was there to greet us, and no wonder. The views down into Borrowdale were stunning. I would have remarked on how the climb was definitely worth it but I was too exhausted. At that point, I sustained what would be my only injury of the day. Approaching a heavy gate on a spring, I failed to react in time when the man in front of me let go of it, and it crashed onto my hand. The pain wasn’t as bad as my embarrassment at not being able to open the gate again and having to be helped out by the person behind me.

We then descended the steepest and longest grassy hillside I’ve ever attempted to run down. I’d love to say I bravely raced down like some of the others, but instead I had to slam on the brakes every time I started to pick up speed.

We finally reached flat ground and I tried to catch up with the runners in front, who’d got away from me at the top of the climb and on the downhill section. I was just about catching up with some of them when we reached our next ascent. Oh good, I rather optimistically thought, as I saw the steep path ahead of me, with a line of runners slowly trudging up it, now my fitness will tell and I’ll really be able to catch up again. Half an hour later, my initial enthusiasm and attempts to keep running no matter what had tailed off.

At a gate, I took the opportunity to stop and look back down into Borrowdale. Once again the views really were stunning, although this time I wasn’t quite so sure the climb had been worth it. Looking at my Garmin, I realised I’d just taken 10 minutes to move 0.15 of a mile. It was looking more and more unlikely that I’d be finishing in 2 hours, as I’d (rather cluelessly) estimated beforehand.

On the next section I caught up with a woman who’d overtaken me on the steep descent earlier. She commented that she didn’t think her legs would know what to do when they finally got back onto flat ground. I couldn’t help agree. My own legs were screaming with pain and felt like jelly.

Not much later, we had the chance to find out as we’d finally reached the top! As the people in front started to jog, I decided I had no excuse not to do the same, even though it was the last thing I felt like doing. It wasn’t as bad as I thought, and I managed to jog along for a few hundred yards, although it was pretty slow and I definitely wasn’t making up any ground on the people in front.

Soon even my hopes of staying in sight of the people in front of me were crushed. The path remained flat, but it was so rocky, windy and narrow that my feet kept getting caught and I was so tired that I couldn’t react quickly enough to avoid all the pitfalls. I kept tripping, stumbling and sliding over wet stone, and eventually I had to admit defeat and just walk. Other runners kept overtaking me, and it was disheartening, as there was nothing I could do. Every time I tried to run, a few steps later I’d almost go flying over a loose stone, or just lose my balance.

It was the worst part of the race, and I have to admit I did start to wish I was doing a nice smooth road race, where all I’d have to worry about was my breathing and my stride length. More and more runners kept overtaking me, and I watched them go off into the distance, bemused as to how they could run so easily on a track that I could barely walk along. Eventually, after being passed by a man with a huge rucksack, and a woman who remarked on how terrible and slippy the stone was before bounding off into the distance as if she’d never slipped in her life, I spotted the very welcome sight of a small table in the corner of a field, with some plastic cups of coke on it (I never knew coke could be so delicious), and two very very nice people who refilled my bottle for me, apologised profusely for pouring water on my hand as they did so, and just generally cheered me up after the previous hour of feeling like I was never going to make it back onto a path that I could move along without feeling like I was going to break my ankle if I made the slightest mistake.

After that, things got a lot better, although we immediately set off back up hill again, this time on a gentler path up a bracken-covered hillside. I think there may have been great views of Derwentwater to my left. Sadly, I couldn’t appreciate them as I was concentrating, once again, on not falling over. The path was a single track, often no wider than my foot, with rocks, tree roots, and brambles across it, and the ferns were so high they kept slapping me in the face.

Still, it was a better path, and I was starting to feel like I was on the home straight. We were past 10 miles now, and although it was now looking like I was going to be around the two and a half hour mark instead of two hours, I felt sure that my Garmin must be lying to me due to all the steep climbs and that we must surely only have another couple of miles to go. Although a few people were still passing me, I was mostly keeping up with the runners around me.

Eventually we arrived down at the shore of Derwentwater once again. The mist over the lake only made it look even more beautiful, and we set off on a more pleasant path through woods and then right along the lake edge. Finally I was able to run freely again, although by this stage that meant something closer to 10 minute miles than the 9s I’d started out at. I did manage to overtake a few of the people who’d left me behind earlier on, though, which is always great.

I made it home in 2 hours 40, a lot slower than I’d expected, exhausted but pretty happy in the end. I was still a bit disappointed in my time though. I thought I must have been fairly near the back of the field given that I was 10 minutes slower than the last person from the year before. But, when I looked at the results a couple of days later, I was surprised to find myself not far behind half way. The final finishers had taken 5 hours. Why was it so much slower than the year before? Had the course changed or were the conditions a lot worse? I looked again at the results from 2015, only to realise that I’d obviously been looking at the results from last year’s 13k race and not the 21k!

Do I wish I’d known exactly what I was getting myself into before I set off? Well, I definitely could have relaxed more during the middle part of the race if I’d known I wasn’t in danger of being passed by the back marker at any moment. Then again, if I’d known it was such a tough course I’m not sure I’d have got any sleep the night before, or even made it to the start line. And that would have been a shame. I had a great day’s running/walking in one of the most beautiful parts of the Lake District, and faced a lot bigger challenge than I realised it was going to be. I definitely aim to go back next year, but hopefully with a bit more trail running practice under my belt by then, and certainly with more of an idea of what I’m getting myself into. 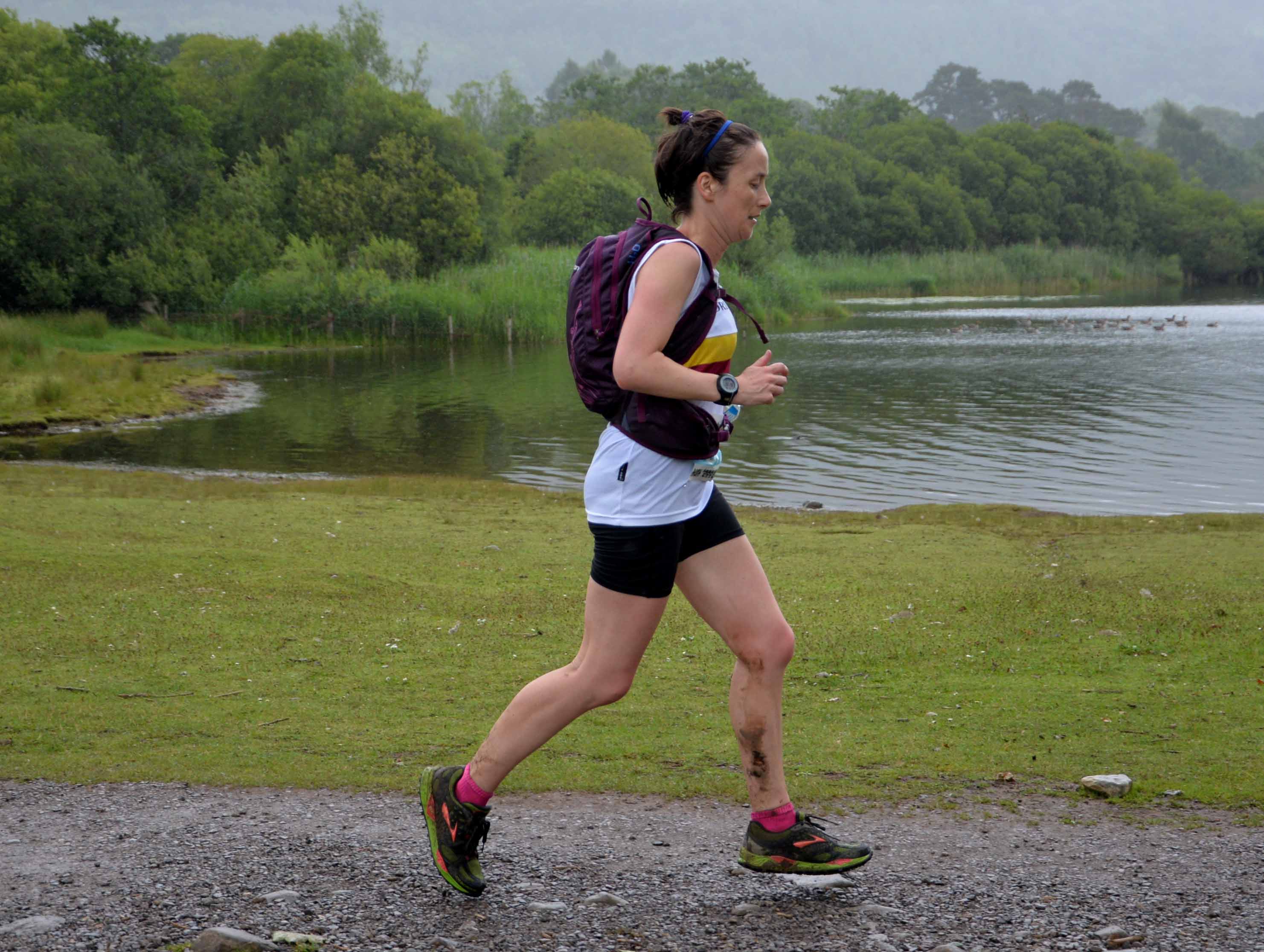 More in this category: « My Marathon Story 2016 - by Katherine Cousins Senior - round up »
Login to post comments
back to top