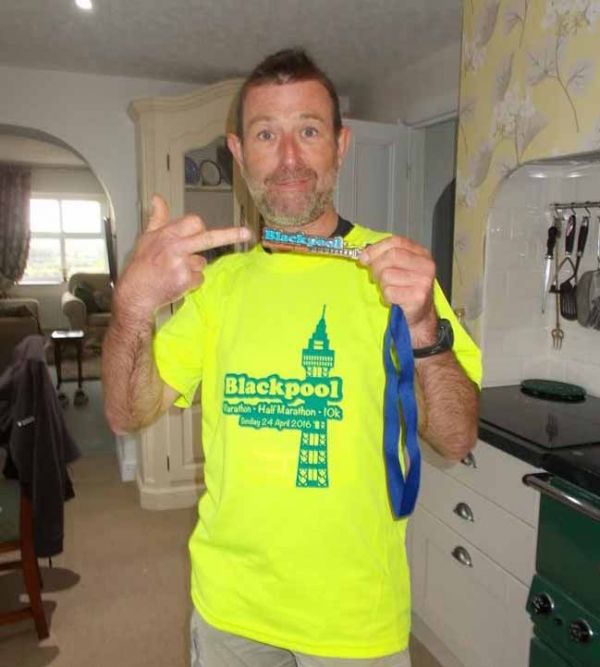 This was to be my first ever marathon at grand old age of 52 although I've run 3 half marathons. I did run marathon distance with Ben Smith (the 401 guy) a few weeks back around Morecambe but this doesn't really count as we had stops for cake and bacon butties! In the run up I hadn't run in 3 weeks because of a niggling calf injury so thought total rest would give me fresh legs for the day.

I've read a lot about marathon running in the run up to Blackpool and was hoping I'd avoid the dreaded 'wall'. I ate an awful lot of pasta in the days beforehand and had a good breakfast of porridge with dried fruit that morning. During the run itself I used up five gels of a type I'd used before. Whether they helped or not is hard to say but I certainly slowed down towards the end from about mile 22 onwards. This may have been down to pain in my left hip and knee. As a result I stopped running from time to time and did a 100m fast walk before resuming. I just felt weary and wonder if the three weeks without running before the race did me more harm than good - very hard to say of course.
Conditions were OK but towards the end of the race the cold wind coming off the sea made it hard as we headed towards Bispham for the second time.  Finished in 4:29:13. I know I can go faster but was pleased with my first marathon.

But I got there in the end and my time was OK for a first marathon I think. What lessons have I learned? Well I'm going to get some physiotherapy because all my weakness seems to be concentrated on the left side of my body. I am also going to do a lot more running so that I can do marathon distance without running out of energy - so my body is accustomed to that distance. My final decision is to lose some weight. My BMI is 24.2 which is OK but I'm a bit thick around the middle and those 'love handles' aren't going to help as they're extra weight. If they weigh 3kg for example, just imagine how much harder it would be to run any distance if you had to carry a rucksack with 3kg in it
This was a training run as I'm going to run the Morecambe Bay Cycleway (81 miles) in 3 days in September for the hospice in Lancaster.

More in this category: « Darwen Heritage Half Marathon Report JACK BLOOR RACE REPORT »
Login to post comments
back to top