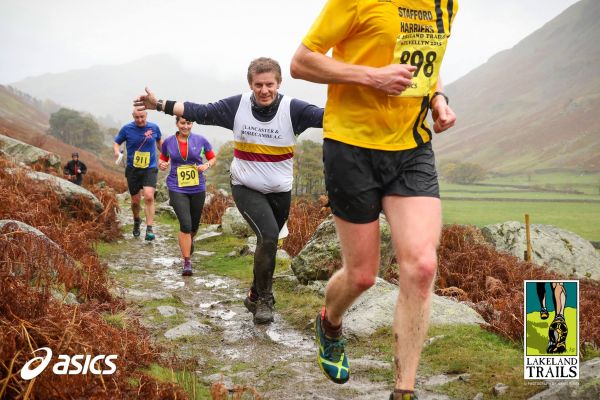 Being a fan of this series of trail races the dirty double was something I’d always wanted to try – but due to other commitments I’ve never been able to fit both in. For those of you who don’t know it consists of a 15K trial race round Helvelyn on the Saturday and the Sunday it’s a 14K. Both race start from Glenridding – but the Sunday one – starts with cruise to the start on opposite side of the lake before basically you run round the southern end of the lake back to Glenridding.

So Saturday approached – accommodation had been booked to avoid trek back home between races and arrived expecting a wet weekend given the forecast. We weren’t disappointed. Weather to be honest wasn’t as bad as we expected and a 12.00 noon off we set leaving the village and beginning the climb past the youth hostel – by 4K climbed just short of 200m. It wasn’t as tough as I seem to remember it – a short turn and we headed back along the valley side watching the runners behind us on other side with a short decent – this is bit where I’m not at all confident and others fly past me. Also a friendly marshal – warned us to watch out as the grass was slippery – “thanks “ – I shouted back before flying head over heels getting covered in mud. The weather was just a little damp with drizzle – after another climb of 55m we turned into another valley – and I knew it was a long slog of around 3K before we turned and headed back to Glenridding. The trails were narrow occasionally I’d catch up with someone and try to find way past –and likewise people would bound past me – and the drizzle got heavier. Eventually came to turn around and a huge black bog to wade through – some very rocky patches with loose stones before we hit more frim paths and 3K or so run back to lake side. Soon trails turned to a road which I knew led downhill to the cricket club – a left turn and straight run back to finish. The downhill covered in leaves so although I took it cautious I still managed to pick off few runners before turned onto more firm and flat roadside and headed back. Again I was feeling more confident on this surface and picked off 4 or 5 runners, crossed the road and headed into the field. With 2 more in my sight I picked up the pace – took one and came to sharp left hand that and the mud slowed me considerably and he pulled away too far – but a strong finish and I was home with chip time of 1 hr 36. 213th position from 446.

Day one completed – but being so wet and cold we decided against Night run round Fell Foot Park we had toyed with and headed to the Youth Hostel in Grassmere and local public house for some re-fuelling.

So after a pleasant evening it was Day Two. 14K Ullswater – night before weather forecast was showing driving rain, 40 mph winds – and it wasn’t far wrong. We arrived before 9.00 to register as 1st sailing left to cross the lake – our departure was due at 10.00 – so after keeping dry in car (it was literally coming down in stair rods as they say) we headed to the start to come across a race official saying all sailing had been cancelled due to unsafe conditions and a mass start was scheduled for 12.00 and an alternative route. Apparently we later learnt that first sailing almost came to a sticky end as it tried to moor on other side of lake. So at 12.00 we assembled I was wearing all my kit instead of carrying it – the field was a mud bath and I was wondering if cross country spikes were more appropriate rather than trail shoes. So off we went – it was to be out and back course with a loop on the trails. A good mile was one the road and flat – 2 mile in around 16 mins splashing through odd puddle or three as we headed south to bottom of lake before we turned up other side. Soon we hit paths and more puddles – or lakes. Runners were stopping taking photos of the black lakes and after about 4k we turned and the climb began. It was more like a natural stair case with a waterfall runing down it  - very little running was done as we climbed around 100m to the summit and the driving rain felt like hail in our faces as wind battered us. Another 2k on the tops – and I was surprised to see photographer still out there in these conditions. After a sharp descent we were back on more sturdy paths and the 2 mile run back to the start. Caught and passed a few runners again - and yes – I did get over taken by a giant duck – that must have been a heavy costume in these conditions and back into the field. After yesterday I knew what to expect on muddy corner. Results not online at time of writing but a tough 8.5k in 55 in 55 mins.

So that’s it dirty double done – although with an alternative Sunday race – and credit must go to the Lakeland trials team for still giving us a race on Sunday in such horrendous conditions – as for the marshals – you were all awesome.

So yes I’ll have to be back next year – and do it properly – weather permitting.

More in this category: « The Prudent Riverside 10 Miles, 2 August 2015- My Race Report. By Michelle Whitton International race reports...... »
Login to post comments
back to top