You are here: Home » News » Leg it with Eric - Review and Results

Leg it with Eric - Review and Results 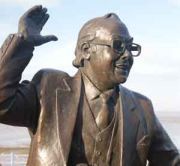 It was organised with Lancaster city council and Lancaster and Morecambe athletics club – and took place Saturday 14th March.
Over 140 runners of all abilities took part and each runner provided with “Eric” style glasses to don as they ran the 3K course – some also ran in fancy dress.
Prior to the start a warm event was led by Louise Goddard to get everyone ready
The race was started by Mayor of Lancaster – there was a very informal and relaxed atmosphere as the runners ran along the promenade to Broadway and back.
It was a great opportunity for families to enjoy running along the promenade – and also raise money at same time for comic relief.