You are here: Home » News » Cross Country - Juniors and seniors at Ulverston take on Storm Callum 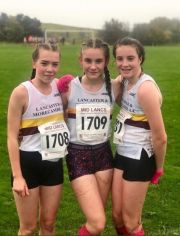 A wet and windy Ulverston was the venue for the first Mid Lancs cross country of the season.

Storm Callum did not put off or athletes as they arrived to battle their way round this hilly muddy course, producing some outstanding performances.

As always, the U11 girls were first to attempt this challenging course and Anna Nicholson set us up for a great day, with a fantastic 5th Place finish, she was followed home by Erin Gillan in 11th, and Annie Dickinson (30th) and Maddison Parrington (32nd). The boys followed with Will Wareing leading the team home in 3rd, followed by Ben Brassington in 8th and then Matthew Harwood(20th) and Oliver Ball(22nd). Battling though the mud, Harry Ball(38th), Nathan giles(45th) and Sam Giles(48th) completed team.

Our U13 girls were next, Maddie Hutton produced a great run to finish 5th followed by Mia Brayshaw in 11th and Megan De Lacy Perkins in 33rd, finishing 3rd team overall. We had a large U13 boy turnout and they did not disappoint, James Brassington led them home in 7th, followed by Fabien Schiller (20th), and Bertie Ellison(28th). Then working as a team through the mud, we had Archie Honeysett (30th) and Zach Earnshaw(31st), Ronan Maher(34th) and Ben Giles (35th).

Alice Hunt worked her way through the torrential rain to finish 7th in the U15 girls, she was supported by Kirsty Maher (11th) and Amelie Earnshaw in 19th. Rhys Ashton powered through the weather to finish an outstanding 2nd place, Tobias Swarbrick followed in in 6th followed by Thomas Mcgrattan(21st), Jack Collett(25th) and Alex Blessington(26th), Fred Calvert finished the team off in 32nd.

As the runners got older, the mud became deeper and the ever-falling rain continued to fall, this didn’t stop Pheobe Hayashi and Sasha Oldham in the U17 girls race as they stormed through to take 2nd & 6th. Lukas Eichmeyer and William Pyle proved their cross-country abilities with 6th and 8th In the U17 boys’ race.

Then came the Senior Women and it was great to see such a turn out for this race in such horrendous conditions. Annabel Mason proved herself to be a great asset to the senior women, with an 8th place finish. In the Ladies over 35 race, Sally Brassington and Lauren Gora led the way with a 5th and 10th place finishes, they were followed by Adele Brayshaw in 28th. Emily Stapleton finished 22nd in the Ladies 45 age group, and returning after a long injury Jennie Hodgson finished a creditable 13th in the Ladies 55 race.

Last were the senior men, but they did not disappoint, in fact we may have left the best till last, Beau Smith stormed home to a great 6th place finish, followed by Mark Leadbeater(13th), Sean Bolland(20th) and Raymond Edgar in 23rd. Kieran Rowlands and Mark Holgate were hot on their heels in in 26th and 27th bringing the team home to a fantastic 2nd place. Sean Bolland, Mark Holgate, James Dalgleish and Kevin Wilson placed the V40 team in 2nd place overall with their outstanding individual runs. Mark Gardner, Thomas Jones and Graham Hodgson all produced great runs proving what a strong senior men’s team we have this year. George Parrington finished 4th in the V70 race.

It was amazing to see so many of our athletes producing such outstanding performances in such horrendous conditions.

And here another few words from Mark Holgate.

The senior mens cross country season started at a very wet and muddy Ulverston with a field of over 250 runners. The aim for the season was to make a team of at least six runners for each fixture; the men certainly exceeded expectations with eleven senior runners facing up to the horrendous conditions. First home for the club was Beau Smith in 35:50 to take 6th place, Mark Leadbeatter finished in 36:31 to take 13th position. Next home was Sean Bolland who was closely followed by Ray Edgar, Keiran Rowlands, Mark Holgate and James Dalgleish who all finished within a minute of each other to take 20th, 23rd, 26th, 27th and 30th spot. Mark Gardner, Kev Wilson, Thomas Jones and Graham Hodgson completed the running to ensure all eleven men finished in the top half of the field. There was a terrific team spirit throughout the day and the team ensured LMAC senior men were firmly back on the cross country map with the senior team finishing second overall from 26 teams and the veterans (over 40) team also finishing second overall, just 1 point off the home team Glaxo Hoad Hill. The next cross country will be on November 24th at Sefton Park in Liverpool, any senior members who are interested in competing can contact Mark Holgate for more information.