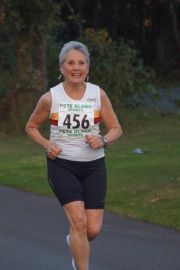 For evergreen Evelyn Elkington now in her 82nd year and nearing completion of 34 years as a runner primarily a road runner,

the year 2017 proved to be yet another remarkable one.

Over the period of 12 months, Evelyn competed in and completed 27 events, in one of which, the local valentines 10k, she recorded her 350th veteran age catogary victory. This statistic only covers the period from 1998 when the details were first recorded. The total is now nearing 370 but the career total is much higher as her first success was in 1985 as firstFV45in the Stockport Daffodil Marathon.
The year 2017 also saw Evelyn set a course record her age at the Ulverston10k in August and, in October she became the Lancashire Athletic Association 5 mile road race over 80 champion. The culmination of the year was being named as United Kingdom 0/80 champion for the 10 mile distance. For good measure Evelyn was also second overall at the 5K, 5 mile and 10k distance.

Thanks to Bernard Elkington for this article