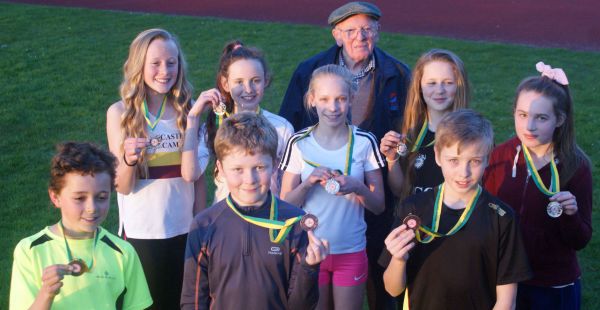 Our Junior athletes have been very busy recently with awards ceremonies from the Cross Country season and now progressing into the Track & Field along with Fell running seasons.

The older Juniors competed in their first Youth Development League Track and Field Match. Although this was Lancaster & Morecambe ACs home fixture lack of pole vault facilities at the Salt Ayre track meant that the event was held at the UClan Arena in Preston. The team had been promoted into Division 2 of the Northern Area and the athletes worked hard to secure 4th place in the competition.

Molly Newton O’Brien was awarded the female athlete of the match for both her performances across all her events and her commitment to the team.

Meanwhile Scarlet Dale travelled to Yorkshire to compete in the third round of the English National Fell Running Champioships. Taking first place in the U16G race extended her lead at the top of the championship table by 6 points. Scarlet was also selected to represent the North West in the Virgin money Giving London Mini Marathon 3 mile Junior British Road Championships, The athletes compete over the last 3 miles of the London Marathon Course shortly prior to the elite field passing through. Scarlet finished in 23rd position with an outstanding time of 17:51.