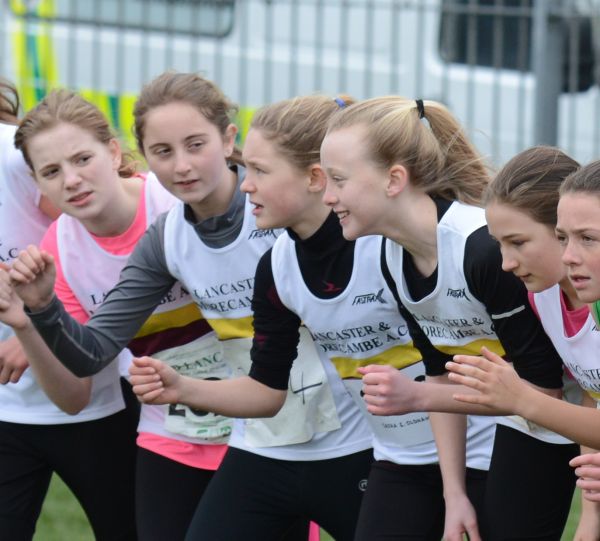 Under 13s on start line

The event attracted most of the country’s top cross country runners who were in action in fields of over 300 selected runners.

Next to race were the U20 women. Seventeen year old Mary Hodgson was thrilled with 19th position in the 6k race and was joined by Helen Ockenden, in her first county vest, finishing in 117th. For both the Lancaster & Morecambe U13 girls selected to represent Lancashire this was their first county selection, nevertheless both rose to the occasion with Erin Moffatt finishing 117th closely followed by Isabelle Woodman in 132nd.

U15 Cumbrian runner, Scarlet Dale, paid the price of going out too hard over the early hills but nevertheless rallied to finish 62nd. She was joined by Lancashire’s Emma Whitaker in 70th.

Meanwhile the rest of the Cross Country Squad was busy representing the club in the final Mid Lancs fixture, held at Rylands Park. Sadly the popular Lancaster University venue is no longer available for the fixture and Rylands proved to be an excellent alternative.

Shea Hannam both finished 2nd and helped the U15 boys’ team, which also included Thomas Knowles and Joseph Twigg finish 2nd. Shannon Perry finished 4th in the U17 women’s race.
The ladies A team took second place with Maria Sell, Lauren Gora and Hannah Bateson. The B team consisting of Jayne Perry, Deborah Oakley and Gill Hamilton finished 11th finishing ahead of many club’s A teams.

photos from Ryelands Park can be seen HERE

More in this category: Blackpool Winter Warmup 22 March 15 »
Login to post comments
back to top