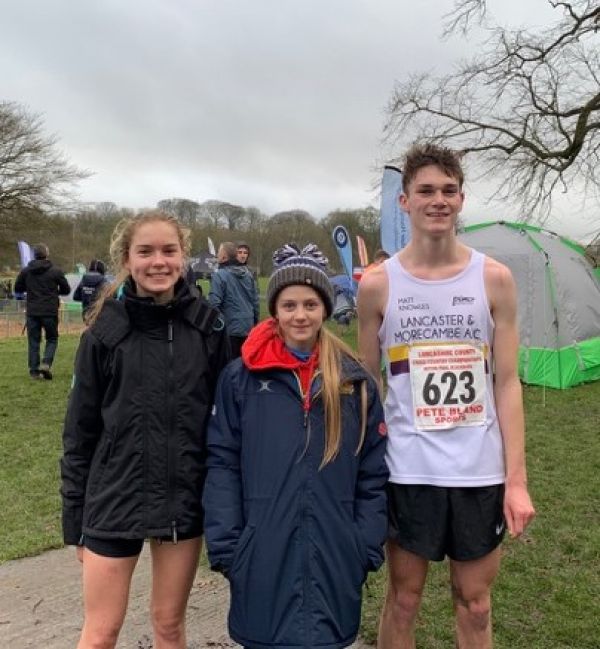 Lancaster & Morecambe AC Junior cross country runners, headed off to Witton Park, Blackburn for the County XC Championships, we knew the course would be muddy it normally is, but we had hoped the rain would hold off, which it did for the most part with the odd very cold shower to remind us it was January, and the wind made its presence known during the races, but despite this we came away with 3 County Champions.

As always, the U11 athletes were first we only had 2 athletes in this age group, but they started the day off with a buzz, Ben Brassington was first in the U11B race and he battled hard throughout and finished a fantastic 4th. Next off was Anna Nicholson in the U11G race, she led from the gun and continued to increase her lead throughout to become our first County Champion of the day.

Next off were the U13 athletes, The U13B had a great turn out and finished 4th as a team, James Brassington led them home in 5th gaining his first county vest, he was followed in by Will Wareing in 15th, Allan Sumner (31st), Micha Walmsley (34th), Ronan Maher (50th) and Bertie Ellison (51st). The girls followed on finishing 6th as a team, Esther Ward leading then home in 7th, Erin Gillan(28th), Maddison Parrington (30th) and Annie Dickinson finishing the team in 31st.

Our U15B team put in some strong performances to finish 3rd as a team, Tobias Swarbrick was first home in 8th, followed closely by Thomas McGrattan in 13th, next was Fabian Schiller and Jack Collett who battled it out for 25th & 27th with Fred Calvert in 33rd.

Our U15G fought hard on the tough muddy course Elizabeth Wareing was first home in 16th, Kirsty Maher and Pippa Darlington raced to the line together for 32nd & 33rd, Aimee Worthington had a great first cross country for us finishing in 38th with Niamh Barsnley Ryan in 51st.

Our finally age group the U17’s gave us our final 2 County Champions with Matthew Knowles and Phoebe Hayashi, both had incredible strong performances and comfortable leads over their next runner, both also gaining their county vests. Alex Blessington finished 22nd in a strong field.

It was a great day our for our athletes, and every athlete put in a great performance.

More in this category: « SportsHall Report Sportshall Report - Preston »
Login to post comments
back to top