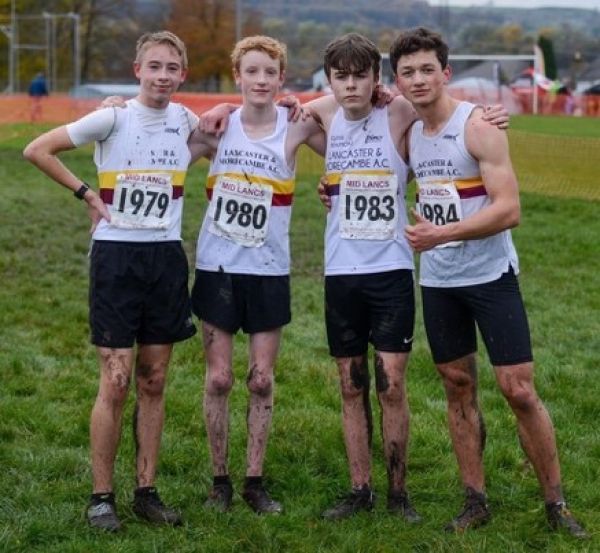 Hyndburn was the destination for the 2nd Mid Lancs cross country fixture it proved as always to be a challenging course, made even more difficult with the very muddy and cold conditions. Lancaster & Morecambe AC juniors rose to the challenge however and put in some very strong and determined performances.

First off were the U11 girls, Anna Nicholson ran strong from the start to win, Ella Brayshaw finished a great 25th, this first race set the rest of the Lancaster & Morecambe athletes off to an amazing start, U11 boys were led home by Ben Brassington in 2nd and Sam Giles in 42nd.

U13 girls were next off we had a team of 6 girls in this race, all finishing strong and bringing the team home in joint 1st, Esther Ward led them home in 6th, Evie Robinson followed close behind in 9th, then Erin Gillan (17th),  Annie Dickinson (23rd), Maddison Parrington (25th) and Abbey Johnston (34th). The U13 boys were led home by James Brassington in 3rd and Micha Walmsley in 22nd, Bertie Ellison (27th), Ronan Maher (31st) and Ben and Nathan Giles finishing the team off in 35th & 36th, placing them 3rd overall.

U15 Boys set off as the mud was certainly getting churned up, and already having seen how exhausted their team mates were after finishing and already tackling the course, Thomas McGrattan and Jack Collett battled it out together all the way round with Thomas finally taking 5th near the finish and Jack 6th. Fabien Schiller came in 12th and James Twigg 22nd, Fred Calvert finished 31st with the team finishing 3rd overall. The girls were led home by Kirsty Maher in 12th which was a fantastic finish as she had lost her shoe to the mud in the early stages, Mia Brayshaw was close behind in 13th and Niamh Barnsley Ryan in 19th, Pippa Darlington finished the team off in 26th a great performance by all of them.

Last but not least the U17 men and women, Larissa Hannam was our sole U17W runner putting in a great performance to finish 10th, on her first XC of the season.

Rhys Ashton finished 2nd after a strong performance on a tough course, Lukas Eichmeyer 5th and Oliver Beaumont 13th, Alex Blessington finished the day off for the juniors in 19th placing them in 2nd overall.

It was a tough cold day, but there were plenty of smiles and some great results for us to be proud of, Liverpool is the next fixture in a couple of weeks, and we are hoping for some solid performances there as well.