You are here: Home » Juniors » Junior Race Reports » Up the Nab - fell race

Up the Nab - fell race 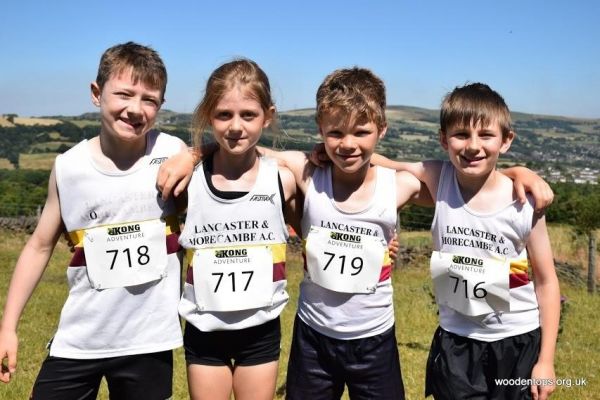 The final race in the English junior fell running championships,

Up the Nab, took place in Glossop on Saturday 30th June. Some may have been put off by the location, the heat or the early start, but we were able to take a core team who were keen to show how they had developed through the series. After pitching up in limited shade and applying sun cream at 9am, the walk commenced up the hill to find the start and survey the route. The biggest challenge was going to be staying hydrated and finding cool shelter pre race. However the older runners did find some protection whilst cheering on two siblings running in the first race.
Our only team ran next in the under 11’s. They had been spotted on the start line for a team photo - yes the LMAC shirt is again recognised amongst the fell running community! This, along with no kit carrying, lifted their spirits and they set out strong within the main group of runners. Oliver Ball stretched out to be in the small group of boys pulling away as they charged up the hill avoiding sheep and thistles. Allan Sumner and Anna Nicholson weren’t far behind, alongside three or four girls who were leading the chasing pack, and Nathan Giles hung in at the rear of this main group. As they reached their turning point they could see the route lined with supporters but only the tops of the rugby posts gave an indication to the location of the finish line. It was now a test of nerve and leg power to see who would be strongest and fastest during the 1km descent through various fields to sprint to the finish on the rugby pitch.
Oliver showed determination as he and two fellow competitors battled it out all the way to the finish line and he managed 7th place. Allan was not far behind and secured 10th place. Anna, using her newly found down hill confidence, was able to overtake a girl near the beginning of the descent and widen her lead to secure 3rd place comfortably. Nathan had maintained his position within the main group and finished 17th.
As the temperature continued to rise the under 13’s took the starting line. Benjamin Giles, missing the company of his team, set out with the other 62 runners as they swarmed up the hill. He achieved 37th, earning himself and the club valuable points.
Our only remaining runner, Matthew Knowles, was running in a Lancashire vest as the under 17 and 19 races were also Inter County championships. The younger runners were keen to support Matthew as he set out in a larger group of entracts, including the runner Matthew had just managed to beat in a sprint finish at Malham. He set off fast and was soon in a small group of leading boys, including his main rival. After a few minutes they disappeared from site and we were left hoping. When the first runner appeared back on the horizon there was an immediate sinking feeling as the silhouette was shorted than expected and did not move in the unique style associated with Matthew. It was soon apparent that this was the Yorkshire based rival but Matthew was chasing and seemed to be closing the gap. There was much shouting and cheering as Matthew charged down the hill in pursuit, but unfortunately it was not to be and Matthew finished 2nd.

We have had a great session and have enjoyed competing in such a friendly atmosphere. It has been great to see all the runners achieving personal goals, from the younger ones being able to run all the uphill section to older competitors achieving PB’s or beating specific rivals. As a club we have been recognised for our achievements but also for our character; being polite, helpful and encouraging during the whole event. The team effort displayed by the athletes has also been replicated by the parents who have worked together to offer support during the whole event and around all the routes. I’m already looking forward to next year.