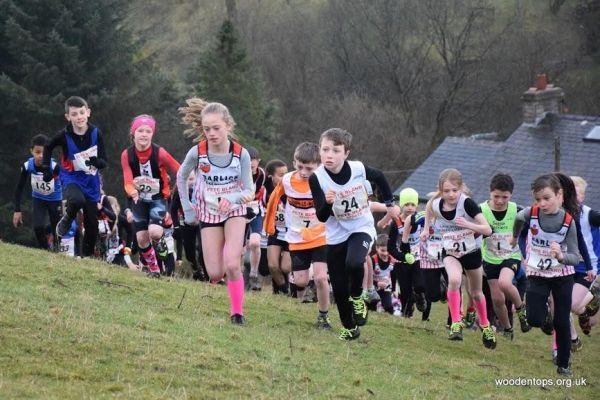 As some of the first competitors to arrive in a drizzly Barley on Saturday 7th April there was time to discuss the day ahead while parents enjoyed a hot brew.

Armed in wellies and waterproofs we set off to see the course. After some guidance from a marshal, who was still marking out the first field, we discovered the start line was at the bottom of the field completely out of sight until you peered over a banking edge. This seemed to add to the buzz and excitement and helped carry eager legs up through the first gate. When the under 11’s stopped at their turning point, drizzle starting to soak through even the best of outerwear, they watched the under 13’s continue into bog as the path disappeared. It soon became apparent that the under 13’s route was much further, very muddy, and the others had given up waiting in the rain to return to the registration point!
Once footwear had been changed, numbers had been pinned and the mandatory toilet visits had been made, we walked back to the starting field noticing how the path had turned to mud slide. Before the race started some were already covered in mud. The challenge was to find a level area to warm up without slipping.
With some success the under 9’s made their way to the start line; parents, siblings and other supporters in place around the route to cheer them on. It was a fast start, with a small group of boys determined to be out front. This included our own Harry Ball, closely followed by another small group including Ella Brayshaw. They were soon at the top corner, able to stretch their legs on slightly more leveled ground and able to see the finish line. The battle was still on as they charged down the field onto a narrow ridge to funnel into the finish line. They did well to stay on their feet, gaining 4th place for Harry (2nd Lancashire boy) and 3rd girl for Ella (2nd Lancashire girl).

Now it was the turn of the under 11’s. From walking the course they knew it was going to be fast and the intial hillclimb would be important. All four runners made a strong start near teh from, and by the time they were in the later section of the climb Oliver Ball was leading the pack, Allan Sumner had worked his way round the outside to be in third place, and Anna Nicholas and Nate Giles were following closely.
Looking very determined they charged along the top path and soon returned to tackle the descent. Oliver was in 1st place, and Allan was catching the 2nd place boy. Anna was the 3rd girl, with the 2nd girl within arms reach but 4th was on her heels. They looked strong but had obviously gone out too hard on the climb. Unfortunately Oliver was caught in the final 10m so finished 2nd (2nd Lancashire boy) with Allan right behind him in 3rd (3rd Lancashire boy).
Anna didn’t manage to catch the girl in front and was overtaken on the bend towards the finish so 4th (4th Lancashire girl). Nathan came 17th for the boys (14th Lancashire boy).
With the sun coming out the under 13’s seemed excited for their race - for some it was their first fell race. They made a steady start up the hill and out of the first field, in the lower half of the group, By the time they were passing the under 11’s turning point they were stretching their legs and picking up the pace, gradually picking off the competitors once at a time. It was possible for the spectators to see across the valley as the line of runners appeared from behind a wood, charging up the hill to their turning point before returning the way they came. Mia Brayshaw had found her stride and kept her position in the field as they made the long return to descend into the finishing field, finishing 8th (5th Lancashire girl). Ben Giles had been reeling in fellow teammate Archie Honeysett but was unable to catch him as Archie overtook 2 girls in the final stretch. They settled for 18th (15th Lancashire boy) and 19th (16th Lancashire boy).
Matthew Knowles ran for the under 17’s and didn’t disappoint his supporters. Although most of the race was unseen, as the upper section of the hill was still in fog, no one was surprised to see him return towards the finish line in first place. This win secured him a place on the Lancashire team for the inter-counties championship.
Lancaster and Morecambe also had three runners in the Senior race. First back was Steven Worsley who finished 15th and was the first M50 home. Joseph Twigg wasn’t far behind in 24th and finishing 2nd for the under 23’s. Allan Sumner came 95th (25th for M40).
Despite being soaked to the skin the children were smiling and we were all pleased with their efforts. Another great race day.

View the embedded image gallery online at:
http://www.lancasterathletics.co.uk/juniors/junior-race-reports/item/240-pendle-fell-race#sigProId4a9ddd2cea
More in this category: « Blacko Fell Running Championships Up the Nab - fell race »
Login to post comments
back to top