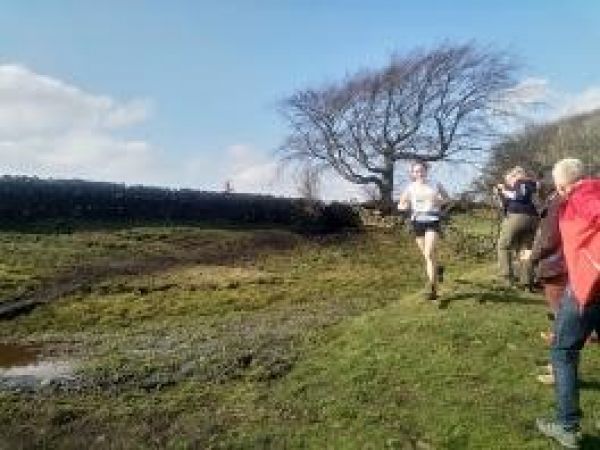 Saturday 14th April saw a number of Junior Lancaster and Morecambe members and their families making the journey to the village of Blacko for the second race in the English Junior Fell Running Championships.

With promise of sunshine and a gazebo full of appealing home bakes we pitched our tent on the village playfield with high expectations. Once everyone was registered at the school, and gathered off the play equipment!, we set out in two groups to walk the courses. The under 9’s and 11’s took a route through a stone wall gate style to climb Blacko hill, with the under 11’s summiting before returning via the same route. Although the routes were not the longest that this age group can run, they had continuous steep climbing and a few stiles to negotiate making the routes technically challenging.
The under 13’s and older went right through a farm yard and up a field before crossing a very boggy wall stile onto open moorland. Here the various age groups branched off for their own routes, and despite the relief that most climbing had been down the consequence was wet, muddy bog underfoot. Those that walked this course returned with evidence of knee deep encounters that nearly cost footwear. Not to mention the precarious stone wall stiles, some with highly tensioned spring gates.
When returning to the starting field a crowd had gathered and it was obvious that this was going to be a well attended event. However there was plenty of space to get sorted and warmed up and the day brightened and the grass started to dry. As always out team of supporters started to disperse to line the routes and encourage all our runners to perform their best.
The under 9’s set out in a mass of 68 runners (the largest fields I ever seen for that age group) meaning a queue formed at the top of the initial track while they climbed the first stile. There was then another dash up a slightly steeper and grassier slope to the next stile. Then it was the steepest section up to the stone wall before turning around and heading down. This was tough and Harry Ball and Ella Brayshaw showed their determination on their faces as they pushed on to the top. Both felt able to run down with long strides allowing them to maintain fantastic position of 7th boy and 5th girl respective.
By the start of the under 11 race the sun was out at full strength making their climb even harder for the 99 competitors. They followed the same route as the under 9’s but used wooden stiles at the stone wall to gain access to the summit and tower turning point. Some found the stopping and starting for the stiles difficult as it broke the flow of their running whilst others enjoyed the time to take a breathe. Our front 4 runners were in the front pack and quite close during the top section, with Oliver descending over one wooden stile while Nate ascended over the other and Allan and Anna were half way up to the tower. However, as in previous races, it was the descent that cost us places. Despite this they all finished well, with Oliver Ball 8th boy, Allan Sumner 24th boy, Anna Nicholson was just behind him and 9th girl, Nathan Giles was 35th boy. Flynn Robinson was running his first fell race and came a respectable 46th boy with a smile on his face the whole time.
Now it was time for the 108 under 13’s to test out the wetter route. As they made their way through the farmyard they were clumped in the middle of the group, however just after jumping the stile into the first field Ben lost a shoe. Mia’s dad helpfully and efficiently forced it back on but the damage was done and he started the climb up the field at the back of the pack. They successfully navigated the duck boards and crossed the slippery wall stile to the flatter circular part of the course. By the time they reappeared at the final wall stile they had mud up to mid thigh and the club vest was redesigned with brown flick patches. Knowing the toughtest sections were behind them they really stretched their legs down the hill, gaining speed and overtaking tiring competitiors. Micah Walmsley lead the team home, placing 34th boy, followed by Mia Brayshaw who was 20th girl. Benjamin Giles had run well to place 50th boy, not far behind runners he would normally finish with.
In the under 15’s Thomas McGrattan was back for another race, and was joined by Lucy Hayashi. Both made steady starts, Thomas about half way down the 76 strong field and Lucy closer to the rear. As they approached the mud bath before the first stone wall stile Thomas lost his footing and fell to his knees on the duck board pathway but made a smooth recovery. Lucy went slower and planned her route and avoided any unnecessary mud contact. This before a likely place to slip and fall as documented by Becky Willoughby in her youtube videos! During the long stretch on the open moor Thomas managed to take a few position and maintained this through the descent to finish 23rd boy. Lucy also managed to work her way up the field by a few places and came 29th girl.
The final race of the day was the under 17’s and 19’s. Unfortunately Matthew Knowles wasn’t able to attend but the club was represented by Phoebe Hayashi. Setting off among a group of 64 runners for this 7km race Phoebe, sensibly, began at a steady pace but near the back of the field. Soon she began working her way through the field of runners as they ascended the first field. By the time she was onto the open moor she was at the back of the main group as looking strong. When returning to the descent she chose a good route from the wall stile to the field avoiding the mud, slippy duck boards and most of the bog, saving her legs the finish. She came 8th girl.

Not only did the runners race well but they were able to enjoy the great community spirit of fell running on the finishing field. This included playing tig with friends, making new friends whilst playing football, eating ice cream, cakes etc etc (there was nothing left for the under 17’s and 19’s and any spectators who had been up the fell for the afternoon), encouraging others runners. Everyone seemed to have a great time and the weather helped. Thank you sunshine. Now we have a few weeks to rest before the third race of the championships. However, if you are interested in supporting us and would like to cheer us on at the next event please speak to Catie Giles or email This email address is being protected from spambots. You need JavaScript enabled to view it. for more details.

The final obstacle into the finishing field was a step up from the farm drive - can you guess the runner?