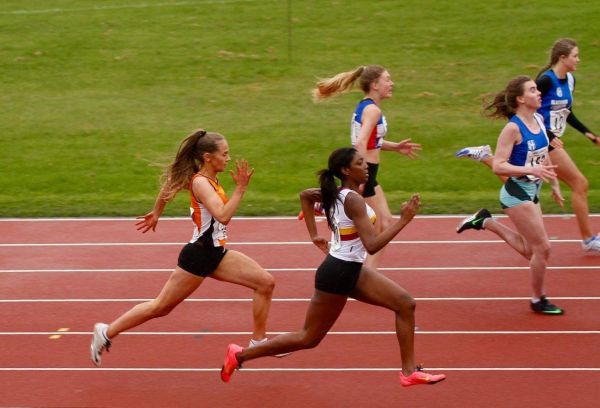 . It was great to welcome some new athletes and bring along some of the more experienced ones too. For many, this was their first competition of the 2018 outdoor season.

The rest of the field have previously competed and there were PBs galore!

Fairly inexperienced competitor Niamh Fisher kick started her 2018 T&F season with entries in the 100m and Long Jump; and PB’ed in both! In her 100m she ran a time of 15.1 seconds compared to the previous 16.4 and in her Long Jump she added a further near meter onto previous PB 3.09 with a jump of 4.04m. Experienced runner Elysha Collins came to Blackburn and competed in the 100m finishing in a time of 14.4 seconds just shy of her PB. Regular to the competition Alana Smith kept the Run, Jump, Throw principle in mind competing in the 100m running in 15.3 seconds, jumping in the Long Jump with a jump of 3.41m and throwing for the first time in the Javelin with a throw of 10.27m. Another experience athlete, Alice Hunt, came and competed in the 800m with a time of 2:43.7. Max’s older brother Jack competed in the High Jump but sadly had to withdraw from competition through injury but completed a jump of 1.45m before withdrawal. U15B Fred Calvert took his cross country and parkrun experience and brought it to the track improving on his 800m PB of 2:49.7 to run a new best of 2:47.0. Further through her athletics career, Imogen Graham came and jumped in the Long Jump with a best of 4.69m just shy of her best.

Four of our very experienced athletes who have moved from the U15 to U17 category made the trip to rainy blackburn to compete. Kirsty Hamilton, jack garwood, temi Mustapha and amy bennett. Kirsty competed in the 800m with a time of 2:30.3 a few seconds slower than her PB time and the High Jump with a jump of 1.45m. jack came and ran the 400m in a time of 60.9 seconds with a best of 58.9 to attempt to beat. Temi ran her regaulr 100m finishing in 13.3 seconds, a 200m in 28.4 a second slower than her best and a first performance in the Triple Jump of 9.31m. Amy started the day of competition for the club with the Hammer throw completing a best throw of 19.78m.
Performances of the day has to go to Hannah Giles and Sam Mercer. Hannah has been working heavily on her throwing over the winter period and the practise paid off. Hannah started with the Hammer throwing an impressive 18.19m which is a 5m improvement to her previous best. Shortly followed in the cage again was her discus competition where Hannah threw 12.84m in comparison to her previous best of 11.72m. Another meter improvement. Hannah concluded her day with the Shot Putt throwing 7.32m compared to previous best of 5.19m. A huge improvement for Hannah throw-out the day!
Sam competed in the 100m, 200m, Long Jump. Sam ran 100m in a time of 12.2 seconds compared to previous PB of 12.4 and his 200m in 25.4 seconds with previous best being 25.8. Every millisecond counts! Sam came off the track and jumped an impressive 5.96m in the Long Jump, previous best of 5.72m. Excellent work by Sam.

Overall, an excellent day of competition for our club.

The next Mid Lancs is on Sat 28th April.