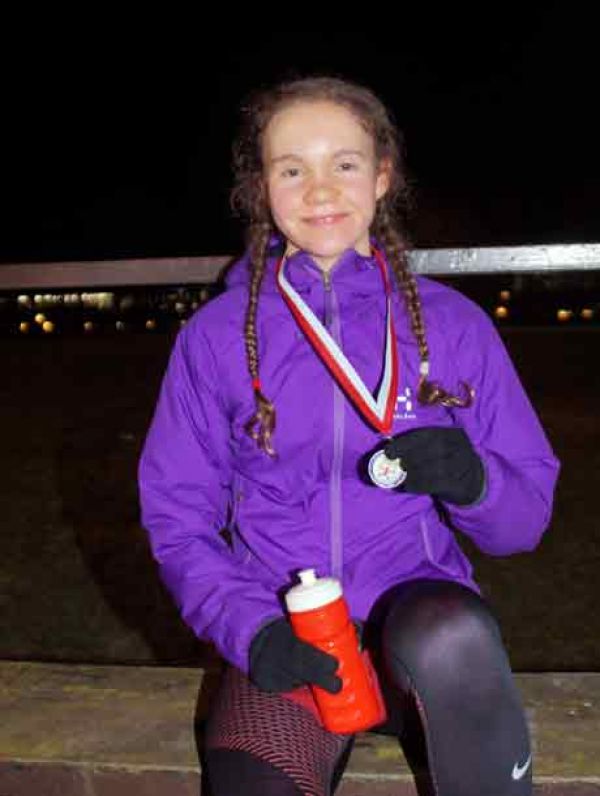 Once again the iconic venue with vantage points looking across the London skyline was used to produce as demanding a Cross Country course as anywhere in England.
Lancaster & Morecambe’s Scarlet Dale toed the line with 150 girls in the Junior women’s race. As expected Harriet Knowles-Jones (Warrington) set the pace and was joined by Niamh Brown (Aldershot, Farnham & District) but in third place from the gun and ahead of the rest of the field sat Scarlet racing confidently over the hilly course. During the second lap Knowles-Jones pushed on and as Brown started to fade Scarlet made progress on the final descent finishing a mere five seconds behind the silver medal position. It was to be another 20 seconds before the 4th placed athlete crossed the line.
This will be Scarlet’s final season training with the club’s middle-distance coach Colin Gemson before she moves to Utah University, USA on a Sports Scholarship in the autumn. During her time at Lancaster & Morecambe AC Scarlet has progressed from a twelve year old finishing 260th in her first major Cross Country to medal at Parliament Hill. This year she was also selected for her first international Cross Country in Venta de Banos, Spain, where she took the silver medal in the Junior race.
Sacrlet’s greatest strength has, however, has been in mountain Running where she has won numerous England and Great Britain vests. In addition to dominating domestic competition in 2017 she finished 6th in the European Junior Mountain Championships and then went on to finish 7th in the World Junior Mountain Championships.
Another up and coming runner who has an exciting future is Tobias Swarbrick. Tobias represented Lancaster & Morecambe AC in the U13 boys’ national race. With 570 finishers his 18th position was exceptional. He will wear his first county vest at the Inter Counties Championships next weekend where, as the current county Champion he will take pole position in the Lancashire start pen