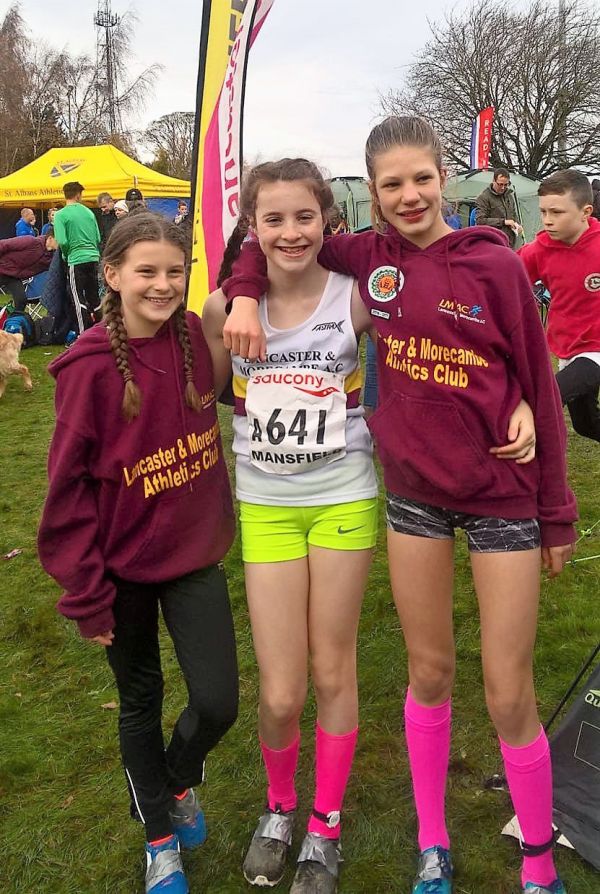 At 6.30am on Saturday 4th November five Lancaster & Morecambe AC Junior Teams set out to compete in the English National cross country relay championships held at Berry Park in Mansfield.

First to run were the U13 boys. Such was the strength in depth of this age group that it was decided to enter two Lancaster & Morecambe AC teams. Tobias Swarbrick had an outstanding run for the A team completing the 2K course to return to the handover area in 4th position. With Jack Collett and Jacob Preston completing the trio the team finished in 46th position. The B team showed a clean pair of heels to a number of A teams with Thomas McGrattan leading off. Fabian Schiller should be pleased with a solid second leg moving the team 14 places through the field and with eleven-year-old Archie Honeysett on the final leg the team finished in 86th.

Kirsty Maher mad a good start for the U13 girls. Mia Brayshaw, in her first national event ran a confident second leg and handed over to Maddie Hutton, who overtook a total of 17 athletes to bring the team home in 62nd place.

Phoebe Hayashi, also competing on the national stage for the first time, ran a solid first leg for the U15G handing over to Kirsty Hamilton. Despite only being 14 this was Kirsty’s fourth national relay championship and as always had a good run for the team. Handing over to Larissa Hannam the team finished in 53rd spot.

The best result of the day was in the U15 boys where Matthew Knowles gave the team an excellent start handing over to Lukas Eichmeyer. With Rhys Ashton on the final leg the team took 22nd position.

Having watch the club’s emerging talent it was then time for the Senior Men to race. The format for this race was 4x5K. With over 200 clubs toeing the line the first leg was always going to be tough but David Brown made an excellent start handing over in 84th. Isaac Scott took the second lap with an impressive run moving the club into 74th. With Mark Gardner on third laps and Mark Leadbeatter on the glory lap the team finished in 65th position.

Team Manager Lisa Preston commented, “All the teams were competitive today and with many of the athletes still relatively young we were thrilled that so many of the teams finished in the top half of the fields. Together with Tobias’ 4th fastest leg1 run it shows the youngsters have both strength and depth going forward”.

The Juniors now have a break from the mud with their next event being the Lancashire Sportshall competition.