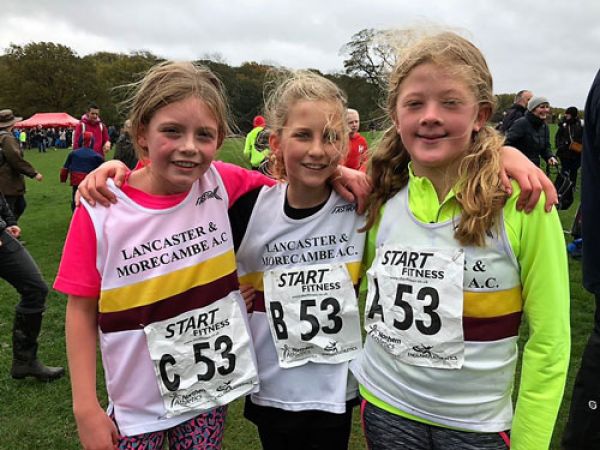 The best result came in the U15 Boys where forty-seven boys toed the line for the first leg. Running for Lancaster & Morecambe Matthew Knowles ran into the hand over zone in 13th position to hand over to Luks Eichmeyer who showed he could hold his own maintaining 13th position for the boys. The glory leg was left to Rhys Ashton. As an U13 boy last year Rhys had the fastest leg of the day, and moving into the older age group, he overtook three athletes to bring the team home in 10th position and in doing so produced the 8th fastest final leg of the race.

Such is the current strength in depth within the club, it was decided to enter two U13 Boys Teams. With forty three teams participating, first off for the A team was Tobias Swarbrick. Returning to the changeover zone in 2nd, only four seconds behind the leader, Tobias’ time proved to be the 2nd fastest over all legs. Eleven-year-old Fabian Schiller and Jack Collett brought the team home into 15th overall. The B team were lead out by Year 7 athlete Jacob Preston who handed over to Archie Honeysett whose impressive run took the team 4 places up the rankings. With Thomas McGratton competing in his first relay competition and overtaking an incredible seven runners the team finished in 29th place, showing a clean pair of heels to a number of A teams.

Eleven year old Maddie Hutton lead out the U13 Girls. In a field of 51 runners she returned in 13th to hand over to Mia Brayshaw. With Kirsty Maher anchoring the team the girls finished in 21st position.

The club also entered teams in the U11 races to allow the younger athletes to experience relay competitions before competing on the National stage. The three Year 6 boys lined up against thirty-three other teams with Leon Wilson opening the race for Lancaster & Morecambe AC. Zach Earnshaw moved the team up six places with Ronan Maher bringing the team home in 19th spot.

The U11 Girls were lead out by Layla Westwell. With Year 5 athletes Ruby Armstrong and Evie Robinson completing the team the girls finished in 22nd position. A great experience for the girls who showed a great deal of promise for the future.

The athletes now have a weekend off before the U13 and U15 athletes are joined by the U17 women at the National Cross-Country Relays at Mansfield. For some of these athletes this will be their first time competing in the National arena and so the Northern Relays proved to be an excellent training race.

Lancaster & Morecambe AC welcome all juniors to join the club. Whilst there is a waiting list for athletes at primary school the club is usually able to accommodate athletes at senior school straight away. A registration and waiting list form for juniors can be found at www.lancasterathletics.co.uk/juniors/junior-waiting-list. As well as Cross Country the athletes compete in fell and sportshall events through the winter.