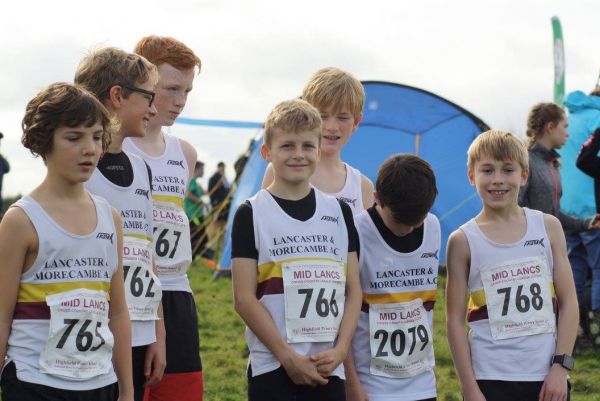 There was fantastic turn out of Junior athletes ready to tackle this technical course.

First off were the U11 girls. Despite being still 8, seasoned runner Anna Nicholson was first home for the club in 26th with Abby Johnston close behind in 27th. Evie Robinson finished in 30th; with Emily Peart completing the team in 36th. Overall the very young team finished in 7th .

Despite moving into the older age group this season U13 girl Maddie Hutton finished an excellent 5th and with Amelie Earnshaw showing what she is capable of in 9th; Kirsty Maher (17th); Mia Brayshaw (22nd ) and Niamh Barnsley-Ryan 46th the team finished 1st .

The first individual win of the day came in the U13 boys’ event where Tobias Swarbrick took the win. Thomas McGratton in his first cross country should be pleased with 23rd. For talented athlete Fabian Schiller the tough course caused him some problems but nevertheless he recorded a credible 25th. With Jacob Preston (28th); Jack Collett (30th ); newcomber James Twigg an excellent 32nd; Archie Honeysett (38th ); newcomber Fred Calvert (46th ) and Luke Leadbeatter (50th ) the team matched the girls winning overall.

An outstanding run by thirteen year old Rhys Ashton placed him 2nd in the U15 boys’ race and suggests an exciting season ahead for this young man. With Lukas Eichmeyer in 7th and Alex Blessington in 29th the team finished 2nd.

It was good to see Anna Harrison competing and finishing 10th in the U17 women’s race having rushed across to the venue after marshalling at the Lancaster Park run earlier in the day.

The other win came in the U20 women’s race with Scarlet Dale stamping her authority on the race beating all the senior women.As part of the senior team with Lauren Gora (14th) and Lisa Preston (109th) the girls finished 10th.