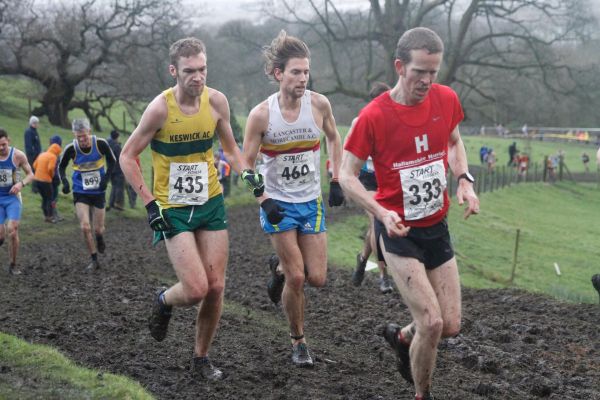 The best result of the day came in the youngest age group where U13 Boy Matthew Knowles took 14th position. Matthew was well backed up by the three younger boys in the team; Tim Woodman who was 147th, Freddie Pearson (169th) and Alex Blessington in194th. Overall the team finished in 21st position. The U15 Boys showed some real strength in depth being lead home by Shea Hannam in 20th . He was quickly followed by James Stanley in 25th and William Howard in 57th. With thirteen year old Tyler Hanafin finishing 159th in his first major cross country fixture the team finished an excellent 7th. Individual athletes also performed well throughout the age groups. In the Junior Women’s race Georgia Hannam finished 20th. In the U13Girls’ race Sasha Oldham should be pleased with 67th and Larissa Hannam gained experience in her first major event finishing 114th. U17 Man Joseph Twigg finished 69th and there was an 88th spot for Isabelle Woodman in the U15 Girls’ event. The senior athletes were also in action. In the Senior Women’s race Hannah Bateson finished 24th and in the Senior Men Steve Worthington and William Onek finished in 57th and 58th position with Mark Leadbeatter finishing in 179th. Saturday 6th February 2016 see many of the Junior athletes back in action competing in the Lancashire Schools Cross Country Championships again at Witton Park in Blackburn. These athletes have been selected to compete for Lancaster District Schools following the Lancashire County Championships and the Lancaster District School Championships and many will be hoping to be selected for the Lancashire Schools’ team.