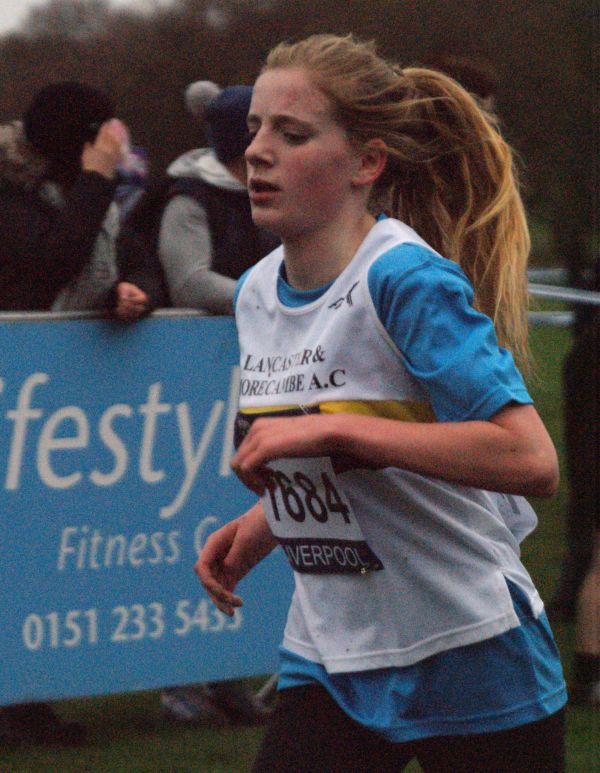 First to compete were the U11 boys and girls. In the boys’ category Tobias Swarbrick continued to show promise as a young endurance runner with an excellent 11th position. He was joined by all-rounder Freddie Pearson in 13th place. Also competing were two younger boys Archie Honeysett (40th) and Zach Earnshaw (63rd) who were daunted by the competition. For the girls Kirsty Maher finished in an excellent 12th position. Newcomer Maddie Hutton showed that she was one to watch in 16th and Cleo Hannafin completed the strong team in 20th.

Next off were the U13 Girls. Erin Moffatt set off hard but despite tiring towards the end of the race finished in 32nd. This was a break through race for Holly Satterly finishing 70th. Kirsty Hamilton took 76th and Amelie Earnshaw, racing up an age group finished a credible 97th. Lucy Harrison completed the squad in 110th.

Only two boys contested the U13 boys’ event. Both performed well with Rhys Ashton in 17th and William Pyle 24th.

Will Howard is beginning to show promise as an U15 boy. He took 40th position and was joined by James Stanley (47th), Tom Knowles (93rd) and Tyler Hannafin (121st).

Well done to Anna Harrison who was the club’s sole entrant in the U15 girls’ race finishing in a solide 94th position.

The best result of the day was in the U17 women’s race where Scarlet Dale finished an outstanding 8th in a very talented field.

Hannah Bateson showed a continuing return to form taking 67th place in the Senior women’s race. She was well backed up by Maria Snell (95th) and Gill Hamilton (204th).

By the time the Senior Men lined up the rain was making the course a mud bath. Nevertheless 574 men completed the course with Lancaster & Morecambe athlete William Onek in 143rd and Graham Hodgson in 466th.

The Junior athletes are next in action on Sunday 13th December at the second Lancashire Sportshall League Meeting at Blackpool Sports Centre where the athletes will be trying to earn County vests as well as club points.

Finally on Sunday 27th December the whole club will be competing in the annual Festive 4k Family fun run. Entry is open to all ages and abilities with a traffic free course taking in running track & cycle track and special Christmas themed medals to all finishers.