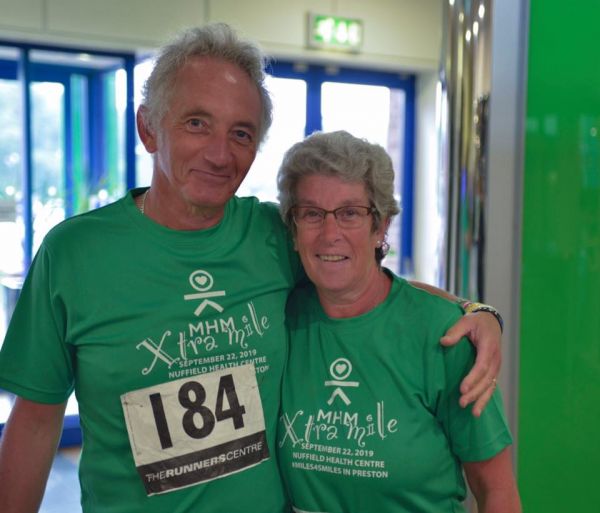 Our next inductees into the Hall of Fame come as a two for one but the magnitude of their involvement and commitment is enough for four maybe even five people!

Initially members of the AAA our next inductees then joined the Reebok Racing Club but they soon realised how much they would benefit from being part of a club and through meeting with Arnold & Mary Bibby and Margaret McGuigan the pathway to Lancaster & Morecambe AC began.

However, we are starting with a member whose achievements have spanned over many different roles and since joining the club in the late ’80s her pathway to the current date is nothing more than remarkable, therefore our next entry into the Lancaster & Morecambe AC Hall of Fame is Christine Perry.

Christine joined Lancaster & Morecambe AC in 1987 and has made over 600 appearances (still counting) in everything from the Northern League track to the London Marathon. Christine is also an Honorary Member of the Club.

Christine was a versatile and committed athlete competing on the track, road and cross country picking up medals and honours right across the board. Christine's favourite distance is 10km and has competed for the club on over 100 different occasions at this distance with a PB of 39 minutes.

As a regular supporter and volunteer at the Lancaster, Parkrun Christine has made over 50 appearances as a runner and also gained over 200 points as a volunteer. It has been said many times that Parkrun isn’t Parkrun without Christine and her cowbell!

As mentioned earlier Christine is a dedicated athlete and at one point after both hip and spinal injuries and subsequent operations, she was told she would not be able to run again. The doctors and physios didn’t anticipate Christine’s ability to make things happen and during the first covid19 lockdown put her trainers on and got running again! She has fought through pain, injuries and setbacks but continues to keep moving forward.

Christine has claimed prizes and podium finishes throughout the 30 years as a member and is a multiple medal winner at the County Championships for both Road & Track.  Alongside this, there wasn’t a Mid Lancs Cross Country senior women's line up for a long time that did not include Christine where she picked up several individual and team titles.

However, there is so much more to Christine because as a volunteer and as someone who gives their time so freely her commitment is second to none. Whilst Christine has never been a member of the committee she had been an avid supporter of club developments, and fundraising.

If the club is hosting an event you can guarantee Christine will be there to support and help the event be the best it can. Her first thought is for the club and not herself which is amazing when you think this commitment has been constant for over 25 years. Christine is an ever-present official, helper, entry desk team leader and she also has volunteered behind the counter serving teas & coffees on many occasion!

Christine is the type of club member who really helps the club tick but also gives it the character and respect from around the county and is affectionately known as the ”Lady with the camera, cowbell or sometimes both”.

Combining all of her running achievements and the continued support in which she gives to the club, Christine Perry is our next hall of fame inductee.

If there is a conversation about running in the Lancaster & Morecambe area then it must include our next inductee, Steve Perry.

As an athlete, Steve has competed in club colours over 1000 times on the road, Cross Country, Track and most likely the odd Fell Race. When asked for a breakdown of his races Steve has underplayed the role in which he has played in the club's road running history, an ever-present athlete always ready to pull on club colours.

Steve confirmed his favourite distance used to be the Half Marathon where he had a swift personal best of 76 minutes but after 30 years of racing, he much prefers 5km & 10km! Steve never shied away from a battle and was always on hand for the 6 or 12 stage relays, quite often a mainstay of the team.

Even though Steve enjoys 5 & 10kms now, he has also completed over 80 marathons with an impressive 2hours 42minutes personal best. Even more impressive is that 18 of them have been the London Marathon.

Steve still has racing in his blood having taken part in over 100 Parkruns, most of them being Lancaster which is notorious for being one of the hardest in the country.

Whilst Steve was always there for the team he did pick up honours himself being a multiple winner on both the Mid Lancs Cross Country circuit and at the Lancashire Cross Country Championships.

During marathon training, Steve also had the honour of representing Lancashire at the Spen 20 which is known as one of the hardest 20 miles in the UK, where he helped the team to a top 5 finish.

All this alone would see Steve being added to the Lancaster & Morecambe Hall of Fame but Steve has given and continues to give a huge amount of time to support the club and to support others.

It is difficult to know where to start reflecting on all the extra work Steve puts in so we will start with as a T&F official. As a Field Judge Steve was an ever-present member of the Northern League team that was successful in the early 2000s. He also continues to support the club at all the Mid Lancs T&F League and also County AA Champs regardless of the conditions. If Steve was officiating on an event then you knew it would be done right, if you were able to calculate the number of hours Steve officiated it would be incredible.

Steve has also dedicated time to supporting Lancaster Parkrun having volunteered over 150 times and like Christine, Lancaster Parkrun wouldn’t be the same without Steve. Steve has excellent attention to detail and a keen eye so when Steve is around events run smoothly although he does admit he can be a little bossy!

The club exists and has thrived because of members like Steve and their contributions of time, expertise and ability to make things happen. As Race Director Steve and his family have been responsible for the Festive 4km for many years, an event that draws in amazing participation and also lots of incredible community involvement.

Steve has also on many occasion been the race director for the Lancaster 10km which is huge for the club not only in terms of reputation but also in raising club funds. It can’t be stressed enough how much time and expertise Steve has brought to these events. Steve quite often doesn’t stop there, if he isn’t RD then he is a timekeeper and/or race adjudicator, to say Steve is well respected on the road running scene is a huge understatement.

Currently, Steve is the club President and with the rest of the committee provides the expertise and drive to ensure the club is vibrant and welcoming. Steve is very much a people person and whether he means it or not, helping people is very much what happens when he is around. As a LiRF at the club, he supports new and existing members with his experience and knowledge and is always around to ask for advice or support.

Steve noted his most enjoyable moments were winning prizes as part of a team. That aspect of being a member of Lancaster & Morecambe AC is something he holds fondest. Steve goes on to add that his love of the camaraderie of travelling to events with a teammate or a squad was an amazing feeling. Steve also mentioned that over the 30 years of being a member he has enjoyed the friendships and rivals over years but the fact that running and the love of the sport has brought them together.

Combining all of Steves running achievements and the incredible support which he gives to the club, Steve Perry is our next hall of fame inductee.

View the embedded image gallery online at:
http://www.lancasterathletics.co.uk/information/hall-of-fame/item/361-steve-christine-perry#sigProId7f576d9e4a
More in this category: « LOUISE GARDNER ( NOW ASPINALL)
Login to post comments
back to top