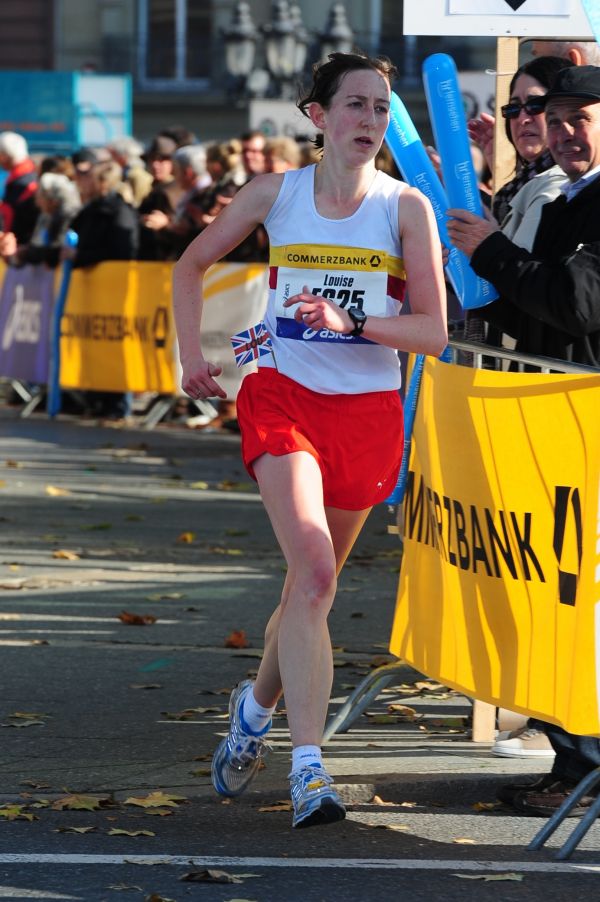 One of the quickest female athletes to ever pull on the Lancaster & Morecambe AC vest is Louise Gardner.

Louise currently holds all of our female club road records and her career has seen her excel at an incredible range of distances & terrains.

Louise was born in 1980 in Lancaster and eventually went onto Dallas Road Primary School & then the Lancaster Girls Grammar School. Whilst sport played a large part of her life at school it was Lancaster & Morecambe AC that was to shape her sporting career.

As a junior athlete, Louise regularly attended the club training with coaches Des Raleigh & Frank McGuigan. At this point Louise did a bit of everything but generally concentrated on sprints, this seems miles apart from the Louise Gardner as a senior.

As her interests changed Louise moved over to train with Jim Stewart and the group of athletes he was coaching. This group propelled her into middle & longer distance races where she started to get a foothold and started to pick up medals.

The transition from Junior to Senior athlete is quite often a difficult period for athletes but Louise excelled and improved again. She combined this with a 1st Class Honours Degree from UCLan in Sports Science.

As a senior athlete she was now training with the senior road group which could quite often boast close to 80 runners on a training night, she always held her own against some excellent teammates. At this point, she was working with Bill Gardner and they focused her targets on picking up medals but also laying the foundation for some fast times.

Louise was exceptional on the road, equally at home on the cross country circuit but picked up quite a few medals on the track but was also available to get involved for the Northern League team & road relays.

Louise's supreme achievement is the 2hrs 43mins at the Frankfurt Marathon and Louise is arguably acknowledged as the clubs greatest female distance runner to date with this achievement and her subsequent performances. Whilst her time at London was slightly slower her 2.45 in 2008 saw her the first female athlete back in the masses.

As a senior athlete on the road, track & cross country, Louise has amassed over 14 County and Northern Medals which has lead to Louise representing the County & NoE over a dozen times.

Louise also represented England as part of a travelling team around Europe for both Cross Country and Road Running with her best performance coming as part of the Home Nations Half Marathon International where she was 5th overall and helped England to the first team overall.

Louise is a hugely popular club member and is an exceptional role model for the clubs' junior aspiring distance athletes. Both her and husband Michael have both spent time with junior athletes around the NW to talk about their experiences as distances runners.

Louise has also taken part in many club organised events but in turn, she has also helped set up, marshal, time keep and even be race director which is no easy task!

A long-serving servant to our club Louise currently is the LMAC Road Captain and also a coach within the road running section. Louise has been a member for 30 years and its hard to see her not being a member for another 30.

Combining all of her running achievements and the continued support in which she gives to the club, Louise Gardner is our next hall of fame inductee.