You are here: Home » Info » Hall of Fame » Averil McClelland 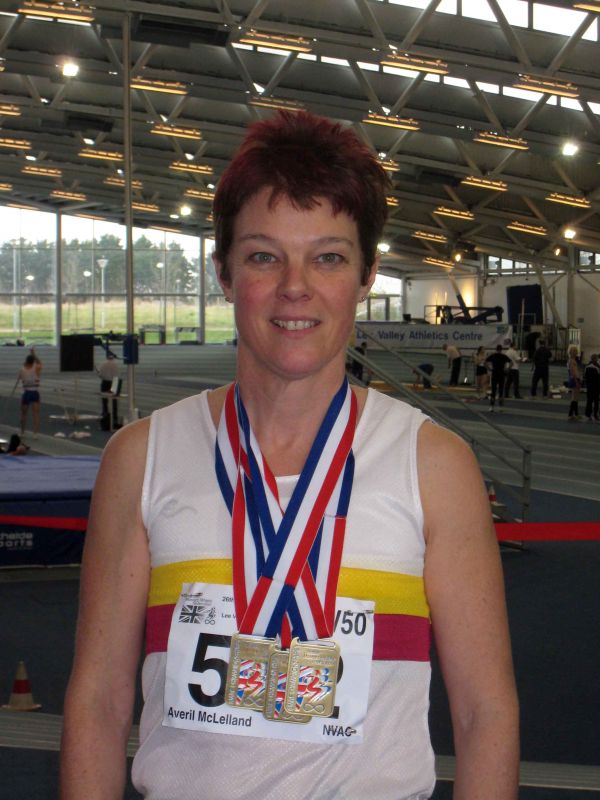 Our next inductee into the Lancaster & Morecambe AC Hall of Fame is the fantastic speed merchant Averil McClelland.

Averil has won more titles then you would imagine is even possible, yet she still has the hunger for more.

Averil was born in Belfast in 1958 and attended Knockbreda Primary School up until the age of 8. She came from an athletic family with her father a distance runner and mother sprinter/jumper. It was in her mother's footsteps she was destined to follow.

At Primary School she recalls that girls sport was pretty poor especially in athletics but this did not deter Averil. She remembers beach races with her parents & also, the classic ‘first one to the lamp post wins’. Even at a young age, Averil was dipping for the line to get the win.

At 12 whilst living in Manchester and attending Cheadle Hulme School Averil recalled there was no girls team and so was forced to run against the boys over 200m in a match against Manchester Grammar School. Many were happy with this arrangement until Averil stormed the race which resulted in a call from Manchester Grammar School the following week saying girls were not allowed to compete, even at 12 Averil was breaking records & barriers.

As a junior athlete, Averil was a member of Stretford AC (now known as Trafford AC) and was under the watchful eye of Jim Harris. During the 70’s it was considered that there was only a handful of ‘big clubs’ and the leagues were known as ‘Motorway Leagues’ due to the amount of time spent on the road to get to matches.

Before Averil was 18 years old she had three English Schools titles & six AAA titles to her name which meant when the 1974 Commonwealth Games in New Zealand came around she was in prime position for selection. Averil was part of a team captained by Lady Mary Peters and this was Averil's first taste of international competition. Averil then went onto compete for GB u18s several times through 1976 in the 100m, 200m and relays.

Averil then stepped up and went to Manchester University with the aim of continuing her athletics and combining it was her studies. During this period Averil took two BUCS titles. However, disaster struck with a severely torn hamstring, Averil focused on her studies going through medical school and qualified as a GP. Averil travelled around the UK and Africa as a GP but athletics was still on her mind. Averil started a family and settled in Lancaster.

In her early 40’s Averil was living in Lancaster but a Sports Medicine Course in Lanzarote at Club la Santa inspired her to take up Triathlon. Averil trained with Lancaster & Morecambe AC road group with Bill Gardner but the track was calling & with an emerging Masters scene, it was clear that Averil's place was on the track.

Averil recalled it took some time for her body to adapt to running again at speed but the love of running fast & jumping long was as strong as she as a junior athlete.

As a Masters athlete, Averil worked with Pete Warden at Preston Harriers but still wearing the Lancaster & Morecambe colours. During this time Averil was ever-present for the senior team and would travel all over the North of England to compete. During this period Averil had a huge points to appearances ratio and was a hugely valuable team member. Averil was also a fantastic role model, team player and friend to many on the team.

Averil's notable titles from 2003 are incredible and with the passion she holds for athletics, it is obvious she isn’t done yet. Her first international Master's medals came in 2003 at Peurto Rico with silver in the 100, 200, 400 & Long Jump, she remembers that Puerto Rico wanted to show a sign of strength so had an Olympians in various events and unfortunately that included the sprints. However, Averil did not have to wait too long for her first gold medal on the world stage with a win the following year over in Germany at the World Indoors.

Since 2003 Averil has claimed podium finishes at multiple National, European & World Championships and was always proud to be a Lancaster & Morecambe AC athlete.

Averil is still very much feared and respected on the circuit for her determination and amazing turn of speed.

At the time of the interview, Averil still holds seven British Records and one European Record but with the Master's scene getting stronger each year those records could come under attack, however, knowing Averil, she’ll just set more!