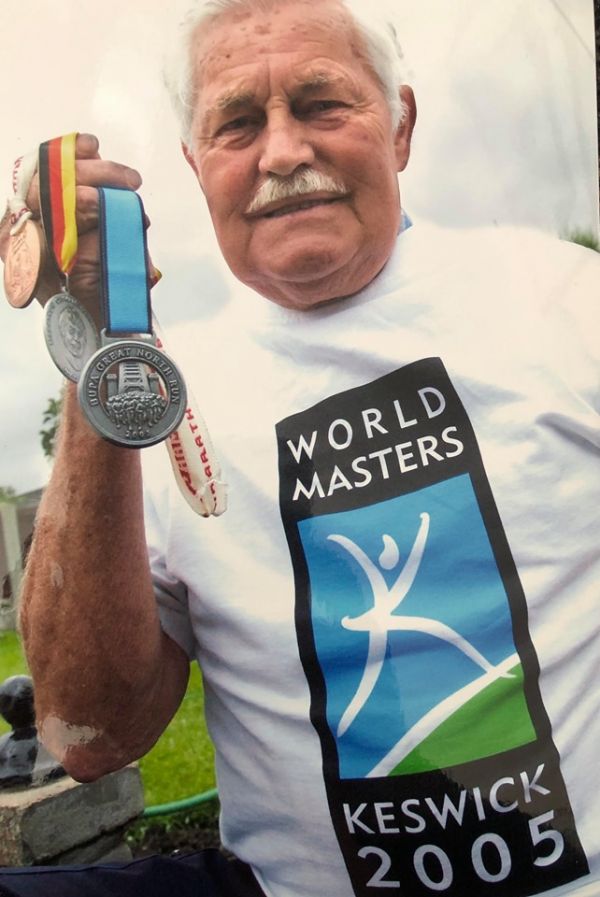 Our next inductee into the Hall of Fame should have been easy to write but given the magnitude of this man, it has actually proved trickier than you’d think! Reg Baker is a remarkable man and he is one of the many reasons why the club is held in such high regard.

The first thing Reg said when he invited us into his home was ‘I wasn’t a great runner’, some of our greatest runners did not always finish on the podium but Reg had a steely determination which always saw him get the job done.

The second thing he said, ‘I haven’t any medals or trophies to show you as I gave them to Ridge Primary School to give out for their sports competitions’. It is undeniable what an incredible & passionate man Reg Baker is.

Reg was born in 1930 and attended Dallas Road School up until the age of 14 before becoming an apprentice Grocer in Lancaster. His love for the city he was born in is never in doubt.

However, Reg was destined for the outdoor life and at 18 joined the Army. Reg followed in his family foot steps of joining the Armed Forces, his older brother served in WW2 and his father WW1. During his time in the services, Reg was stationed in the UK but also around Europe and North Africa working as part of the United Nations.

In the 50s Reg was still part of the Armed Forces but worked on the shipyards and built and repaired ships that would sail around the world. It seems Reg can turn his hand to most things!

In the 1960s Reg stepped up his involvement with Athletics and brought his son & daughter to the athletics club to train on the track. He noted there was not a large Fell running team but they were a great bunch and did not hesitate to get involved.

Reg like our early inductee Arnold was there in 1965 when Lancaster & Morecambe AC came into existence and he began coaching. He had amazing success with athletes such as Kevin Kapper and Karen Evans, some of their club records are still standing strong today.

During the time talking with Reg, he noted a time where he found himself competing in the Railway Championships but not for running, Speed Walking. He noted ‘it was the only event they would let me do!’. Reg said it was the hardest thing he had ever done because the technique was quite the opposite of being up on the Fells.

Reg competed for Lancaster & Morecambe AC on the road in the World Masters Road Marathons but mainly spent his racing days upon the Fells & Mountains and completed the Ben Nevis event over 17 times which was his favourite event.

Reg was a remarkable runner for many reasons, Reg actually ran up (and down!) Clougha Pike over 5000 times. Imagine completing 5000 laps of the athletics track…..now imagine 5000 times up Clougha Pike and you can appreciate the steely determination mentioned earlier.

From the mid-’70s Reg qualified in both time keeping & track judging but quite often found himself on the starter's block. Reg was reliable and was exceptionally proud to be still representing the club even as an official. Reg is still starting races out on the circuit today and is immensely proud to still be involved in local events.

Reg was also Lancaster & Morecambe AC Honorary President for over 10 years and was extremely proud to be honoured in 2011 and awarded honorary membership to the club. He is also an honorary member of the FRA and has letters of commendation from the Mid Lancs League.

If you ever have the pleasure of meeting Reg you’ll realise he is the type of man that does amazing things, not for the gratitude or applause, but because he thinks it is the right thing to do and for that Reg Baker is the next member of the Lancaster & Morecambe AC Hall of Fame.

View the embedded image gallery online at:
http://www.lancasterathletics.co.uk/information/hall-of-fame/item/297-reg-baker#sigProId2215e3d226
More in this category: « Mark Croasdale Averil McClelland »
Login to post comments
back to top