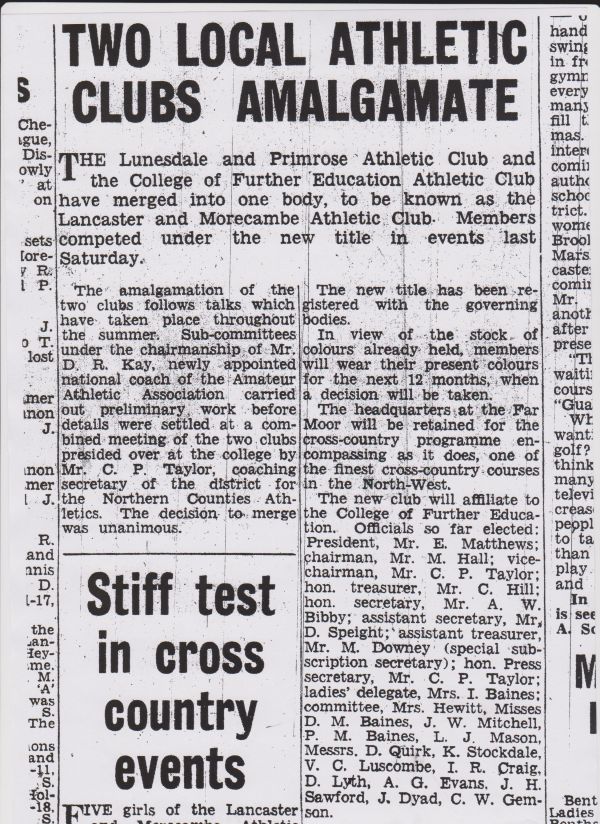 It became Lunesdale and Primrose Athletic club running in sky blue and Scarlet for track while cross country athlete ran in white vests in green band.

Then in 1965 (following meeting throughout the summer) Lunesdale and Primrose merged with the College of Further Education Athletic Club to become Lancaster and Morecambe Athletic club. The Lancaster Guardian tells us they 1st competed on Saturday 19th October and first met together on Monday 21st October. Secretary was a Mr A W Bibby.

The rest is history.

1 Until 1962, athletes in the Lancaster/Morecambe area had a choice of 3 clubs to join – Primrose Harriers, Lunesdale Athletic Club and Lancaster Harriers.

2 As a base for training, Primrose Harriers used a hut at Far Moor sports field at Quernmore Road. The hut belonged to a football team - Dry Dock United. Primrose also used the Mission Hall in Westham Street.

4 Our oldest member, Arnold Bibby was secretary when Primrose Harriers and Lunesdale Athletic Club amalgamated in 1962. Arnold had joined the club in 1949.

5 A new cinder athletics track was built in the early 60s at Lancaster and Morecambe College and this led to the Trimpell Sports Club establishing an athletics club at the college.

6 On 23 July 1965, Lunesdale and Primrose joined with the College athletic club to form Lancaster and Morecambe Athletic Club.

7 The road running section was established at the college after the amalgamation of the two clubs.

9 Another well known club athlete was Mark Croasdale who in addition to setting several club records achieved national fame by running against a horse over 22 miles in Wales and just losing the race by two minutes.

10 From 10 members in 1949 and very basic facilities, the club has now over 400 members with track and field facilities, and a purpose built
clubhouse. That’s progress.

You can see some photos from our history

View this gallery on Flickr
View the embedded image gallery online at:
http://www.lancasterathletics.co.uk/information/50th-anniversary-celebrations/item/97-50-years-of-history#sigProId12074e087b
More in this category: « Anniversary T -shirt Anniversary Photos »
Login to post comments
back to top